An Authentic Account of an Embassy from the King of Great Britain to the Emperor of China; Including Cursory Observations made, and Information obtained, in Travelling through that Ancient Empire and a small Part of Chinese Tartary; Together with a Relation of the Voyage undertaken on the Occasion by His Majesty's Ship the Lion, and the Ship Hindostan in the East India Company's Service, to the Yellow Sea, and Gulf of Pekin; as well as of their return to Europe; with notices of the several places where they stopped in their way out and home; being the Islands of Madeira, Tenerife, and St. Jago; [t]he port of Rio de Janeiro in South America; the islands of St. Helena, Tristan d'Acunha, and Amsterdam; the coast of Java, and Sumatra, the Nanka Isles, Pulo-Condore, and Cochin-China. Taken chiefly from the papers of His Excellency the Earl of Macartney, Knight of the Bath, His Majesty's embassador extraordinary and plenipotentiary to the Emperor of China; Sir Erasmus Gower, commander of the expedition, and of othe 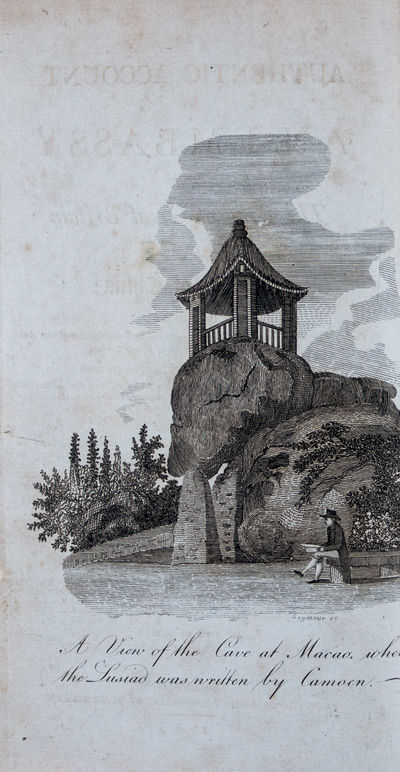 by Staunton, Sir George (Text by); Samuel Seymour (Engravings by)
Philadelphia: Robert Campbell, 1799. First American edition. Hardcover. g+ to vg. Large octavo (8 1/2 x 5 1/2"). xxiii, [1], 297, [1]pp (Vol. 1); 267, [1], xxivpp (Vol. 2). Modern brown cloth, with gold lettered leather title label to spine. Engraved frontispiece to both volumes. Lacking the separately printed atlas, as usual. First American edition of this official report on the British Macartney Embassy to China that took place between 1792 and 1794. It was written after the return to England by the Secretary to the mission Sir George Leonard Staunton, 1st Baronet (1737-1801), based on his own observations and notes from other crewmembers, including his twelve-year-old son Sir George Thomas Staunton, 2nd Baronet. "The account offers rich insights into the beginnings of British Imperialism in China and thus makes it an important primary source for the historiography of Sino-Western relations. There is an academic dispute whether the account marks a sudden turning point in British-Chinese dynamics or reflects a slow and complex divergence. While the political and economic ambitions of the embassy failed, the account by Staunton brought back detailed descriptions of and observations on the Chinese culture that were received with curiosity in the West and led to the commercial success of the book and the publication of several translations and subsequent writings on the Macartney Mission." (From Wikipedia) This work is splendidly illustrated throughout with eight stunning engravings by Samuel Seymour, two in volume one, six in volume two, including the frontispieces as called for in the directions to the binder. The xxiv page appendix contains detailed tables and charts dealing with population and socio-economic information. Previous owner's stamp (E. W. Sage) at verso of first frontispiece, and at upper margin of first title. Moderate and sporadic foxing / age-toning throughout. Binding in very good, interior in good+ to very good condition. (Inventory #: 46241)
$750.00 add to cart or Buy Direct from
Eric Chaim Kline Bookseller
Share this item