A Tour Through the Island of Great Britain. Divided into Circuits or Journies [SIC]. 4-vol. set (Complete) 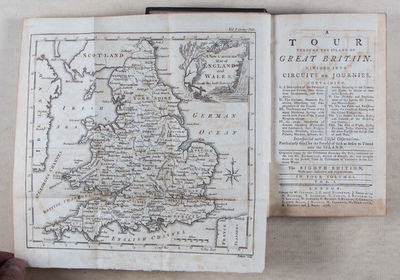 by De Foe, Daniel; Samuel Richardson
London: W. Strahan; J. F. and C. Rivington; J. Buckland; R. Baldwin; T. Longman; T. Caslon; J. Richardson; et al., 1778. Eighth edition. Hardcover. g to vg. 12mo (7 x 4 1/2"). [8], 379, [9]pp (Vol. 1); [4], 404, [12]pp (Vol. 2); [4], 417, [11]pp (Vol. 3); [4], 379, [9]pp (Vol. 4). Original full spotted calf, with gold lettering and ruling to spines. Large engraved folded map frontispiece of England and Wales to first volume, and large engraved folded map frontispiece of Scotland to volume 4. Decorative initials. Originally published in three volumes between 1724 and 1727, under the title "A tour thro' the whole island of Great Britain," this work is an account of English author Daniel Defoe's travels. Other than "Robinson Crusoe," "A Tour" was Defoe's most popular and financially successful work during the 18th century. Pat Rogers notes that in Defoe's use of the "literary vehicle (the 'tour' or 'circuit') that could straddle the literal and the imaginative," "Nothing...anticipated Defoe's Tour." Thanks in part to his extensive travels and colorful background as a soldier, businessman, and spy, Defoe had "hit on the best blend of objective fact and personal commentary" in his descriptions of locations and trips around Britain. Daniel Defoe did not necessarily travel to all of these locations, and certainly did not travel them as or just before he was writing the work; rather, he relied on his past journeys, likely during his time as a merchant or while working for politician Robert Harley in the early 18th century, and, at times, relied on or was inspired by other travel literature such as William Camden's Britannia and John Strype's new version of John Stow's Survey of London. Bindings darkened, with front hinge of first volume starting. Some foxing to endpapers. Minor and sporadic foxing throughout. Bindings in overall good, interior in very good condition. (Inventory #: 46238)
$475.00 add to cart or Buy Direct from
Eric Chaim Kline Bookseller
Share this item