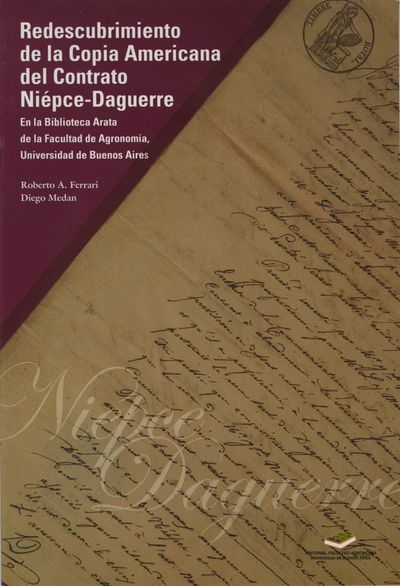 by Ferrari, Roberto A. and Diego Medan
Buenos Aires, Argentina: Editorial Facultad de AgronomÃ­a, Universidad de Buenos Aires, 2010. First edition. 8vo., 73 pp., b&w illustrations, plus 1 CD-ROM. Color illustrated stiff wrappers. Fine, as new. With dogged determination, Roberto A. Ferrari tracked down Daguerre's copy of his original contract with NiÃ©pce, which was housed in the Arata Library, Buenos Aires, Argentina. In order to actually view the contract, Dr. Diego Medan was enlisted in a search at the library. This volume documents Ferrari's search for, and research into these documents, with the entirety of the documents reproduced on the CD-ROM. The text is in Spanish, while the documentary appendix is in Spanish and French.

Roberto A. Ferrari was born in Buenos Aires in 1949. His interests in technology and the history of science and photography are wide ranging. He founded the AsociacÃ­on Biblioteca JosÃ© Babini, and is also a founder of the Sociedad Iberoamericana de Historia de la FotografÃ­a. He has contributed papers to several photographic congresses, and published articles in the Encyclopedia of Nineteenth-Century Photography, John Hannavy, editor, 2008.