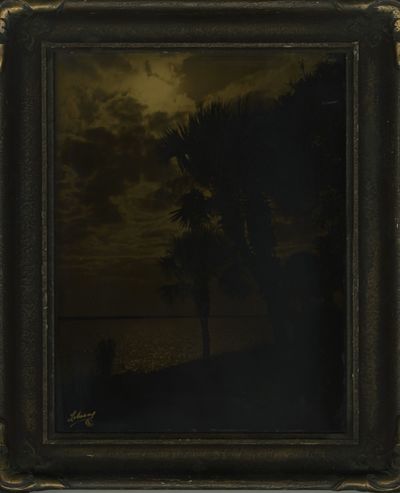 by LeSesne, R. [Richard] H. [Habersham]
Daytona Beach, Florida: R. H. LeSesne, 1920. LeSesne, R. H.. 11 1/2 x 9 1/2 inches Haberle-tone (Orotone) in original gesso-decorated gilded frame. Original sealing paper backing is lacking, with the photographer's label "R.H. LeSesne, Frame Department, Daytona Florida" affixed at the bottom edge. A few slight blemishes to the frame surface; otherwise, a very good example. Richard Habersham LeSesne, 1880 - 1948, was born in Clarkesville, Habersham County, Georgia and settled in Daytona, Florida by 1908,when he purchased the photographic studio of Henry Kaiser; he died there in 1946. His reputation as a photographer is primarily tied to the Daytona Beach Speedway where he documented the land speed record attempts from the 1920s through the 1930s. However, as Daytona Beach gained as a winter destination for those further north wanting warmer climes, he seemed to have established a market for his local landscapes, using the Orotone, or as he named them, Halberle-tones, the process made famous by Edward S. Curtis. In keeping with the similarity of appearance, LeSesne used the same "bat-wing" frames that Curtis popularized. (Inventory #: 53014)
$1,200.00 add to cart or Buy Direct from
Andrew Cahan: Bookseller
Share this item
Andrew Cahan: Bookseller, Ltd.
Offered by