Directions for the Sick during Homoeopathic Treatment 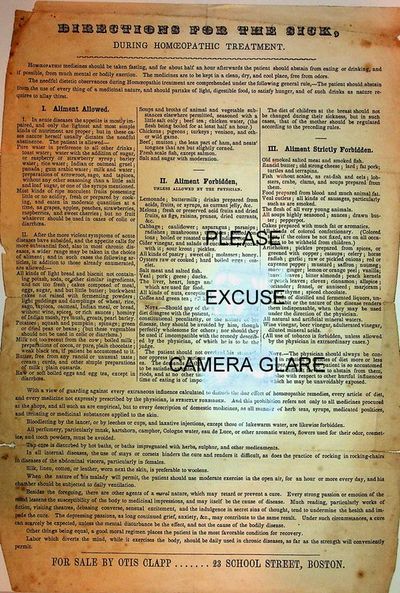 by [ Otis Clapp ]
23 School Street, Boston [MA]: Otis Clapp, 1850. First Edition. handbill. Good. First Edition. Handbill, 8 x 11 3/4 inches. Folded for mailing. Irregularly trimmed margins, creasing and folds with some separations with very minor loss to text (no loss of meaning), minor browning to the extremities. handbill. A specific set of instructions for the patient taking Homoeopathic treatments. The handbill is addressed to anyone on any sort of treatment. The middle portion separates into three categories various Aliment's (foods) I: Aliment Allowed. II. Aliment Forbidden (unless allowed by the physician. III. Aliment Strictly Forbidden. The bottom portion offers various advice for certain types of ailments, including when not to use rocking chairs, types of clothing next to the skin, and advice regarding agents of a moral nature.

"It all began in 1840 when Otis Clapp opened the doors of his small retail pharmacy in Boston's Back Bay. His varied background included publishing and public service when he served as a member of The Massachusetts House Of Representatives. He became one of the founders of The Massachusetts Institute of Technology (M.I.T.) and The Home For Little Wanderers, one of the first orphanages. From 1862-1875, Otis even served as The Federal Collector of Internal Revenue! His appointment, which was personally signed by President Abraham Lincoln, is still displayed by the company in its Canton, MA headquarters.

As described by a turn-of-the-century, handwritten, and now faded Otis Clapp research diary, "the early 70's brought Otis's son, Dr. J. Wilkinson Clapp, to the company as a partner" (the writer was referring to the 1870's as opposed to the 1970s). Dr. Clapp, a research scientist first, and a businessman second, devoted a great deal of his time to the Boston University Medical School where he was a professor of pharmacy. His contributions to the school included numerous research projects, the installation of operating room facilities, and student nursing accommodations. Dr. Clapp was the "son" part of Otis Clapp & Son, Inc." (company website)