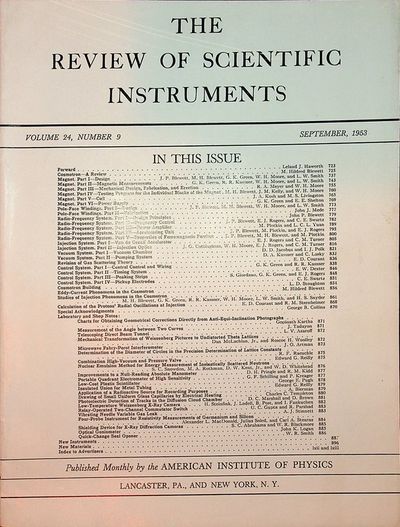 by [ various ]
Lancaster, PA and New York, N.Y.: American Institute of Physics [ AIP ], 1953. First Edition. Wraps. Near Fine. First Edition. xxxii, [723]-898, xxxiii-xliv pages. Grey printed wrappers. Bumped at base of spine. The entire issue offered. Pages 725-870 contain articles about the Cosmotron, starting with a review, six articles on the magnet, 2 on windings, five on radio-frequency systems, two on injection system, 2 on vacuum system, four on the control system, one on the building, and some other articles besides. Nice state of the art description as of September 1953. Wraps. "The Cosmotron was a particle accelerator, specifically a proton synchrotron, at Brookhaven National Laboratory. Its construction was approved by the U.S. Atomic Energy Commission in 1948, it reached its full energy in 1953, and it continued running until 1966 and was dismantled in 1969. It was the first particle accelerator to impart kinetic energy in the range of GeV to a single particle, accelerating protons to 3.3 GeV. It was also the first accelerator to allow the extraction of the particle beam for experiments located physically outside the accelerator. It was used to observe a number of mesons previously seen only in cosmic rays, and to make the first discoveries of heavy, unstable particles (called V particles at the time) leading to the experimental confirmation of the theory of associated production of strange particles. It was the first accelerator that was able to produce all positive and negative mesons known to exist in cosmic rays. Its discoveries include the first vector meson.

The name chosen for the synchrotron was Cosmitron (representing an ambition to produce cosmic rays) but was changed to Cosmotron to sound like the cyclotron. The beam size of 64 × 15 cm and an energy goal of about 3 GeV determined the machine parameters. The synchrotron consisted of 288 magnets each weighing 6 tons and providing up to 1.5 T, forming four curved sections. The range of field change was kept within limits by first accelerating particles to an intermediate energy in another accelerator and then injected into the Cosmotron. The straight sections without magnets were worrisome because there was no focusing and the betatron oscillations would change suddenly and might swing wildly. But, all these major problems were overcome." (wiki). (Inventory #: 27579)
$138.00 add to cart or Buy Direct from Kuenzig Books
Share this item

A Selection of Massachusetts Laws Pertaining to Surveying and Real Property

[ Massachusetts ] : The Massachusetts Association of Land Surveyors and Civil Engineers, Inc , 1986
(click for more details about A Selection of Massachusetts Laws Pertaining to Surveying and Real Property)
View all from this seller>