Your Rights As A Mental Patient In Massachusetts: A Handbook for Patients 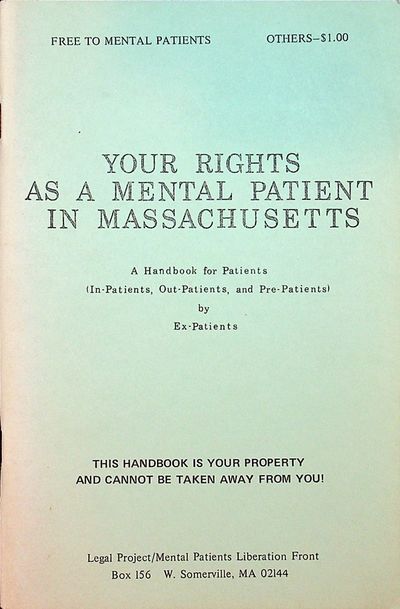 The key text in the intellectual development of the survivor movement, at least in the USA, was Judi Chamberlin's 1978 text, On Our Own: Patient Controlled Alternatives to the Mental Health System.Chamberlin was an ex-patient and co-founder of the Mental Patients' Liberation Front.

Coalescing around the ex-patient newsletter Dendron, in late 1988 leaders from several of the main national and grassroots psychiatric survivor groups felt that an independent, human rights coalition focused on problems in the mental health system was needed. That year the Support Coalition International (SCI) was formed. SCI's first public action was to stage a counter-conference and protest in New York City, in May, 1990, at the same time as (and directly outside of) the American Psychiatric Association's annual meeting.In 2005 the SCI changed its name to MindFreedom International with David W. Oaks as its director.

Common themes are "talking back to the power of psychiatry", rights protection and advocacy, and self-determination. While activists in the movement may share a collective identity to some extent, views range along a continuum from conservative to radical in relation to psychiatric treatment and levels of resistance or patienthood." (wikipedia)

Scarce, with only 10 copies in OCLC. Recently gaining importance as mental health and it's importance in day to day quality of life becomes more evident. (Inventory #: 27566)
$55.00 add to cart or Buy Direct from Kuenzig Books
Share this item