On the Death of George Washington: Testimonials on the “Father of His Country” 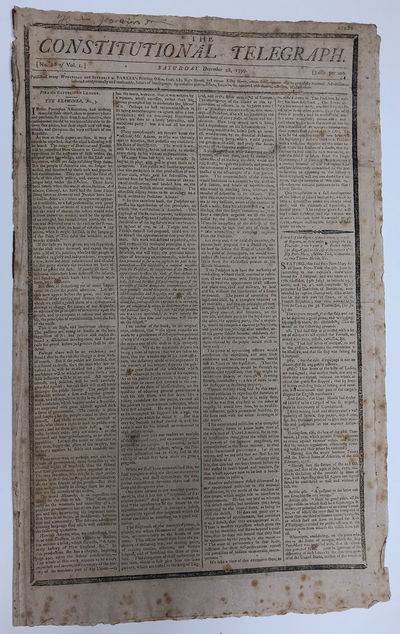 by [GEORGE WASHINGTON]
The nation's first president had died on December 14, 1799, and was interred at Mount Vernon by his family four days later. As the president was laid to rest in the family's receiving vault, vessels in the Potomac River fired a final salute to the commander in chief. [GEORGE WASHINGTON].
Newspaper. The Constitutional Telegraph, Boston, MA: Parker's Printing Office, December 28, 1799. 4 pp., 12¼ x 19½ in.
Printed within a black mourning border, this newspaper reprints messages from President Adams, secretary and son-in-law Tobias Lear, the House of Representatives, the War Department, the Common Council of New York lauding George Washington, the extract of a letter from Alexandria offering a detailed account of the first president's last hours, and two black-bordered memorials, one from the Massachusetts Society of the Cincinnati and the other from the Boston Independent Fusiliers. Additional advertisements advising that businesses would be closed out of respect for Washington, and a theater troop performing a monody (ode in the Greek style) in honor of Washington.

News reached Philadelphia, then the seat of the federal government, on the day of his burial. Congress and President Adams immediately began planning an official mourning procession for December 26, and this paper of December 28 indicates the respect commanded by Washington to his countrymen.

From John Adams's message to the House of Representatives:

"It has pleased Divine Providence to remove from this life, our excellent fellow-citizen, GEORGE WASHINGTON, by the purity of his character, and the series of services to his country, rendered illustrious through the world. It remains for an affectionate and grateful people, in whose hearts he can never die, to pay suitable honor to his memory." (p3/c2)