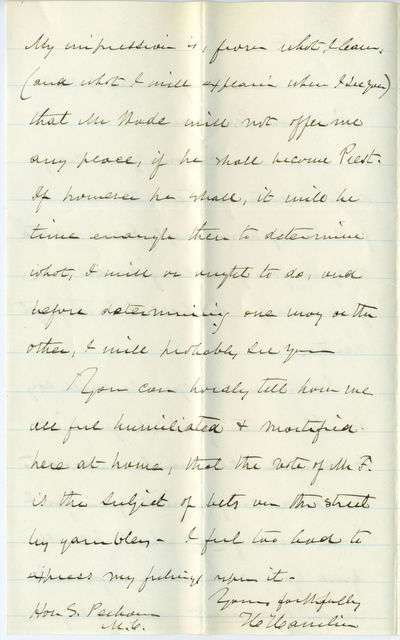 by HANNIBAL HAMLIN
"My impression is … that Mr Wade will not offer me any place, if he shall become Prest… You can hardly tell how we all feel humiliated & mortified here at home, that the vote of Mr. F[essenden]. is the subject of bets on the street by gamblers." HANNIBAL HAMLIN.
Autograph Letter Signed, to Sidney Perham, May 9, 1868, Bangor, Maine. 2 pp., 5 x 8 in.
In the midst of the impeachment trial of President Andrew Johnson, former Vice President Hannibal Hamlin writes to Maine Congressman Sidney Perham, who had voted for Johnson's impeachment. Hamlin correctly speculates that he would not be offered a position if Johnson was removed and replaced by Benjamin Wade. The office of vice president remained vacant after Johnson became president upon the assassination of Abraham Lincoln. Under the Presidential Succession Act of 1792, the president pro tempore of the Senate, then Radical Republican Senator Benjamin Wade of Ohio) would become president if Johnson were removed from office.

Hamlin then discusses the Republican party's embarrassment over whether Maine's Senator William P. Fessenden (Lincoln's Treasury Secretary from July 1864 to March 1865), would vote on impeachment. Ten former Confederate states had not yet been readmitted, so 27 states were represented in the Senate, with 54 members. To meet the required two-thirds majority, 36 senators had to vote to convict. On May 16, 1868, a week after the present letter, Fessenden committed political suicide. Believing that prosecutors had manipulated the presentation of evidence, and erred in basing impeachment on violation of the questionable Tenure of Office Act, Fessenden joined all nine Democrats and nine other Republicans to vote for acquittal. In each of three votes, the count was 35 to 19 in favor of conviction - one short of the necessary two-thirds majority.

I have your very kind letter of the 4th, and I feel truly how deeply I am indebted to you for your confidence, and friendship. I shall, I trust forget neither.

I notice all you so well say on the matter of which you write. I should like much indeed to see and confer with you, for I have some facts which I could give you and some information which I cannot write to any one My impression is, from what I learn, (and what I will explain when I see you) that Mr Wade will not offer me any place, if he shall become Prest. If however he shall, it will be time enough then to determine what, I will or ought to do, and before determining one way or the other, I will probably see you.

You can hardly tell how we all feel humiliated & mortified here at home, that the vote of Mr. F[essenden]. is the subject of bets on the street by gamblers. I feel too bad to express my feelings upon it.

Hannibal Hamlin (1809-1891) was born in Maine (then a part of Massachusetts) and managed his father's farm before becoming a newspaper editor. He was admitted to the bar in 1833. Elected as a Democrat to the Maine House of Representatives in 1835, he served from 1836 to 1841. He represented Maine in the U.S. House of Representatives from 1843 to 1847 and in the U.S. Senate from 1848 to 1861. Hamlin opposed the Kansas-Nebraska Act of 1854, and left the Democratic Party for the newly formed Republican Party. In 1860, he was elected as Abraham Lincoln's Vice President. In 1864, to give Lincoln a southern running mate, he was replaced by Andrew Johnson. Hamlin served as Collector of the Port of Boston, but resigned in disagreement with Johnson over Reconstruction policies. In addition to again serving in the U.S. Senate, from 1869-1881, he also served as Minister to Spain from 1881 to 1882.

Sidney Perham (1819-1907) was born in Maine (then a part of Massachusetts) and briefly attended Bates College before turning to farming and raised sheep. He served as Speaker of the Maine House of Representatives in 1854, the only year he served in that body. From 1859 to 1863, he was clerk of courts in Oxford County, Maine. Elected as a Republican to the U.S. House of Representatives, Perham served from 1863 to 1869, and as Governor of Maine from 1871 to 1874. He served as Secretary of State of Maine in 1875 and as appraiser at the U.S. Customs House in Portland from 1877 to 1885. He also served as a member of the board of trustees of the Universalist General Convention for twenty-seven years. (Inventory #: 22863.02)
$2,200.00 add to cart Available from Seth Kaller
Share this item