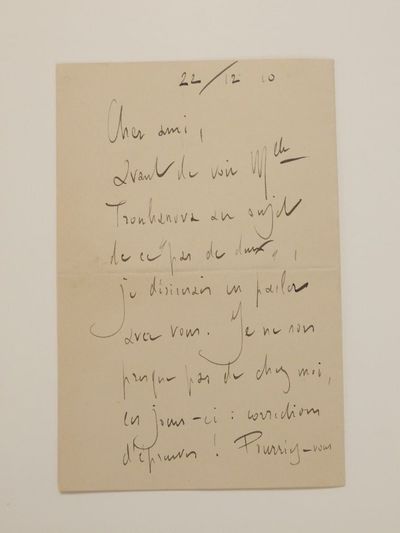 by RAVEL, Maurice (1875-1937)
Paris, 1910. unbound. very good. A.L.S. 8vo. 2 pages, Paris, December 22nd 1910, to noted French music critic Robert Brussel, in French, in full (translated): "Dear friend, Before seeing Mademoiselle Trouhanova to the 'pas de deux', I would like to speak to you about it. I hardly ever go out of the house, what with all the corrections and proofs that have to be taken care of. Could you stop by tomorrow, or the day after for example, at whatever hour is convenient for you. Your sincerely devoted Maurice Ravel". *At the time this letter was written, Ravel had transferred two of his piano works into ballets, including 'Valses nobles et sentinmentales' specifically orchestrated for the ballet troupe of Natasha Trouhanova. Fine condition. French composer best remembered for his works 'Bolero', 'Daphnis et Chloe', 'La Valse', and 'Gaspard de la Nuit'. (Inventory #: 293111)
$1250.00 add to cart or Buy Direct from
Argosy Book Store
Share this item