Fred Goudy's Last Letter. With a Note by Sol Hess 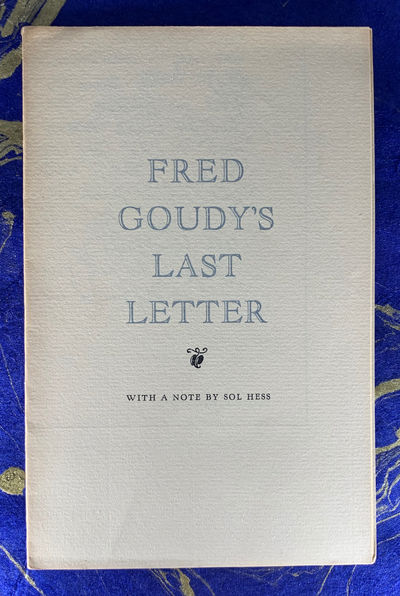 by Sol Hess (1886-1953)
Portland, ME. Paperback. Very Good. Series: Typophiles Monograph, No. 30. Single sheet of 14 x 9-inch paper, printed on both sides, folded twice. [8] pp. Page [1] titled in slate grey ink, fleuron, the internal opening is a reproduction of a Goudy hand-written letter; text clean, unmarked. Extremities toned, the center fold is starting. Muir Dawson's copy without distinguishing marks. SFK519-1041. Very Good. This keepsake was suggested by P. K. Thomajan and planned by Sol Hess. It was composed by the Lanston Monotype Machine Company, Philadelphia and printed by Fred Anthoensen in Portland, Maine. It contains a reproduction of the last letter written by Frederic Goudy to Sol Hess, Thursday May 8, 1947. Goudy died the following Sunday. Sol Hess was an American typeface designer. After 20 years, Hess rose to typographic Manager of the Lanston Monotype company in 1922. He was a close friend and collaborator with Montotype art director Frederic Goudy. Hess was particularly adept at expanding type faces into whole families, allowing him to complete 85 faces for Monotype. See: Wikipedia. (Inventory #: SFK519-1041)
$15.00 add to cart Available from
John Howell for Books
Share this item