For Your Eyes Only. 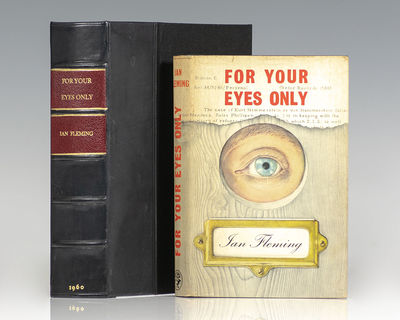 by Fleming, Ian
London: Jonathan Cape, 1960. First edition of the eighth novel in Ian Fleming's James Bond series. Octavo, original black cloth. Fine in a near fine price-clipped dust jacket with light rubbing. Jacket design by Richard Chopping. Housed in a custom half morocco clamshell box. The collection contains five short stories: "From a View to a Kill", "For Your Eyes Only", "Quantum of Solace", "Risico" and "The Hildebrand Rarity". It has "the only British dust jacket with any depiction of Bond: the eye in the peephole is his. Fleming made artist Richard Chopping paint it many times, until he was satisfied with the shape and, particularly, the color" (Biondi & Pickard, 46). It was made into the 1981 film starring Roger Moore and Carole Bouquet; the 1985 film A View to a Kill starring Moore, Christopher Walken, and Grace Jones and the 2008 film A Quantum of Solace starring Daniel Craig. (Inventory #: 107458)
$2250.00 add to cart or Buy Direct from
Raptis Rare Books
Share this item