The Stock Market Crash--And After. 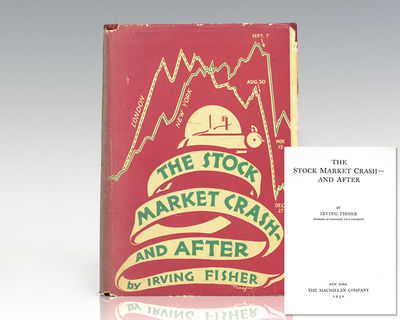 by Fisher, Irving
New York: The Macmillan Company, 1930. First edition of Fisher's important work tracing the causes and the immediate aftermath of the 1929 Stock Market Crash. Octavo, original red cloth. Near fine in a very good dust jacket with some tape repair to the spine. Rare in the original dust jacket. "Irving Fisher was, in the opinion of many, the leading economic theorist in the United States during the first half of the 20th century. Although his contributions to economic theory and to the development of econometrics ensure him a preeminent position among contemporary economists, he was a versatile man. In his day he was equally well-known as social philosopher, teacher, inventor, businessman, and passionate crusader for many social causes" (DAB). In 1929, just before the crash, Fisher wrote that stock prices had "reached what looks like a permanently high plateau." However, Fisher's perspective changed drastically post-crash and he managed to salvage his reputation with the brilliant understanding of the market's machinations that he displayed in this work, along with some inspired solutions for recovery. While Fisher ultimately painted a rosy picture of America's future, it was never realized due in part to Fisher's misplaced belief that America would adopt wise banking policies and gold control and his absolute faith in Hoover's leadership abilities. By 1931, the United States had fallen into the depths of the Great Depression. (Inventory #: 107462)
$4,800.00 add to cart or Buy Direct from
Raptis Rare Books
Share this item