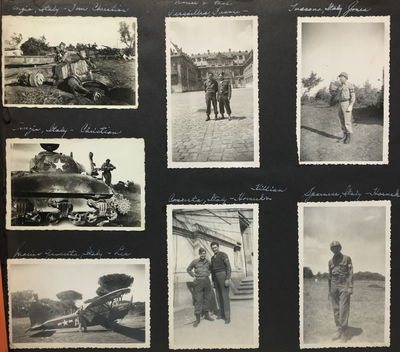 by Lillis, Robert and James
Cord-bound, production photo album, 39 by 29 cm, 42 pages [21 leaves] of which 40 are used. Wear at the corners of the album from some splitting to the front and rear hinges – otherwise stable. The first leaf is detached with heavy chips, tears and rodent nibbles at the fore-edge. The following two leaves have chips and tears on the fore-edges, but the remaining leaves are all very good with some small chips here and there. The album chronicles two brothers and their time serving in World War II. It appears they served Sparanise, Italy, and moved north to Angio, and into Lyon, France. The brothers were from Grand Rapids, Michigan. James Lillis was born in 1921. He was working as a furniture maker when he enlisted in August of 1942.1 Robert Lillis was born in 1923. He was working as an auto mechanic when he enlisted in November of 1942.2 The album contains 323 black and white photographs – none appear to be missing. Only 71 of the images are captioned, mostly with locations or names of their buddies. Only one photo is dated, a tiny snap of some children dated February 1944. It appears they served in Sparanise, Italy, and moved north to Angio, and into Lyon, France. The photos appear to be in no particular order, but it looks like the brothers enjoyed their time serving with the MPs, who were often used to maintain a police function in occupied areas. While there are several snapshots of the soldiers touring the sights of Paris, including the Eiffel Tower, and what looks like Rome, you'll find numerous photographs of bombed-out buildings in Lyon, Sparanise, and Angio, as well as images of blown-out bridges, several tank wrecks, airplanes – both wrecks and functional – and two group portraits of the 53rd MPs in Lyon, France. Included are eleven photos of motorcycles – including two shots in formation, most of which are Harley-Davidson WLA models. Featured are photos of the brothers and other men drinking beer outside of a café in Lyon, flirting with women, riding a donkey, firing a .45, relaxing on a beach, arm and arm with several local women, and a photobooth image of one of the brothers. There are images of big guns, a make-shift cemetery, several military encampments, and a shot of enemy soldiers being marched in formation, hands-on-heads, down a city street. Perhaps most striking is a shocking, rare image (7 by 11.5 cm) of a female presumed collaborator, stripped to the waist, head shaved, and a swastika painted on her belly. Images of those who offered comfort and aid to the enemy and those even suspected of collaboration have become scarce and it is surprising that it is nestled, without a caption, amongst images of smiling comrades, relaxed moments, and the ravages of a war just won. (Inventory #: 3201)
$600.00 add to cart Available from Bay Leaf Books
Share this item