The Works of Oliver Goldsmith in 10 Volumes (Turk's Head Edition) 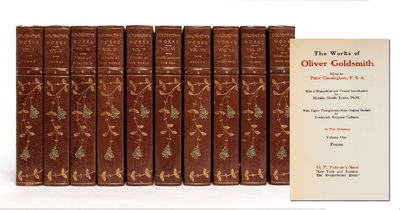 by Goldsmith, Oliver [ed. Peter Cunningham]
New York and London: G.P. Putnam's Sons, 1908. First Thus. Near Fine. Limited edition of 1,000 set, of which this is 631. Publisher's half calf over marbled boards with gilt and inlaid morocco to spines. Top edges brightly gilt; remaining edges deckled. Marbled endpapers. All volumes Near Fine or better, with occasional bumping or small chips to leather at extremities of spines and corners. Front hinge to volume X tender but holding well. In all, a lovely and pleasing copy, fresh margined and bright internally featuring illustrations throughout by Frederic Simpson Coburn. Near Fine.    Goldsmith was an Irish novelist, playwright, and poet whose facility among different genres brought him fame and friendship with many great eighteenth-century British authors. Kept busy by writing quickly and voluminously for Grub Street, the center of London's disreputable part of the literary world, Goldsmith nevertheless also found time to hone novels such as The Vicar of Wakefield, poems such as The Deserted Village, and plays such as She Stoops to Conquer. Contemporaries celebrated Goldsmith's ability to craft deceptively complex characters, most notably in the case of Charles Primrose, the vicar from The Vicar of Wakefield. Goldsmith counted Samuel Johnson among his closest friends, and Johnson wrote the epitaph that appears on Goldsmith's memorial in Westminster Abbey's famous Poets' Corner: "To the memory of Oliver Goldsmith, poet, philosopher and historian, by whom scarcely any style of writing was left untouched and no one touched unadorned, whether to move to laughter or tears; a powerful, yet lenient master of the affections, in genius sublime, vivid, and versatile, in expression, noble, brilliant, and delicate, is cherished in this monument by the love of his companions, the fidelity of his friends, and the admiration of his readers.". Near Fine. (Inventory #: 3167)
$1500.00 add to cart or Buy Direct from
Whitmore Rare Books
Share this item