The Life and Adventures of Nicholas Nickleby 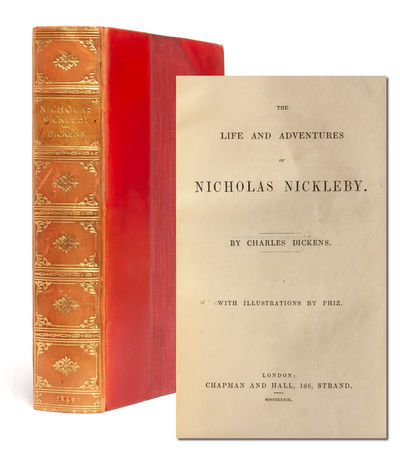 by Dickens, Charles
London: Chapman and Hall, 1839. First edition. Bound by Bayntun in three-quarter red calf over cloth boards, all edges gilt. Spine a bid faded, internally an excellent copy. Complete with the half-title and all 40 plates engraved by Phiz. Likely washed at the time of binding (as most plates show little to no foxing). Most of Smith's internal flaws are found, including the ones of pgs. 123 and 160, only found in the earliest copies bound from the parts. Nicholas Nickleby, Dickens' third novel, was originally serialized in monthly parts, then issued as a book in cloth. The publishers also had a small number of copies bound up in the present morocco both for presentation - a census of copies inscribed by Dickens on publication show them all to be in the green morocco binding - and for sale to the public at a higher price. "Dickens' third novel has always been a favourite with the general public. Indeed, it was the book's huge sales that enabled Dickens to give up parliamentary reporting and become a full-time writer...The theatricality of the novel attracted new and more appreciative critical attention [and it] demonstrates the inextricable link between public and private" (Bannerjee). A satire tackling the injustices faced by both women and men within the Victorian class system that relied so heavily the social status of the patriarch, the novel follows Nicholas Nickleby as he seeks to support his mother and sister after his father's death. When Nicholas' father dies after losing all of the family's money, it is up to the young man to emerge as the new and more morally sound patriarch. Dashing and likable, Nicholas ultimately prevails, dodging shady characters along the way and securing a respectable life in Devonshire for his extended family. A favorite among Dickens' works, Nicholas Nickleby has been adapted into a much-loved film. (Inventory #: 3172)
$1500.00 add to cart or Buy Direct from
Whitmore Rare Books
Share this item