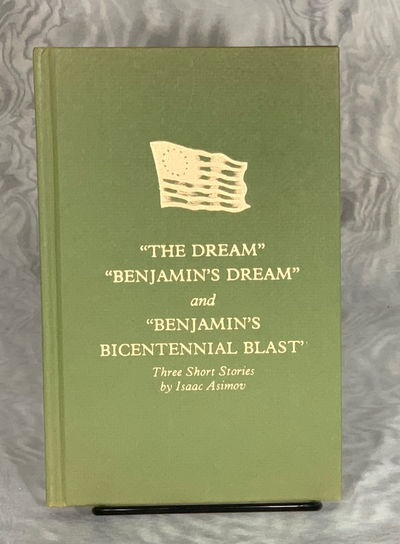 by Isaac Asimov (1920-1992)
New York, NY: Privately Printed, 1976. Hardcover. Very Good. John DePol. Series: Printing Week Library of Benjamin Franklin Keepsakes, No. 23. Designed as a Keepsake for The Printing Week Project, New York, 1976, by M. J. Baumwell, wood engravings by John DePol of the Endgrain Press. 12mo. 7 1/8 x 4 1/2 inches. 51 pp. Half-title, illustrated throughout with woodcuts by John DePol in maroon ink, decorative initials, tailpieces; text clean, unmarked. Gilt-stamped green paper over boards, glassine dust-jacket, decorative end-papers designed by John DePol; binding square the tight, jacket spine toned and head and tail chipped. Muir Dawson's copy without distinguishing mark. SFK519-050. Very Good. This is the 23rd Keepsake in the Printing Week Library commemorating the 270th anniversary of the birth of Benjamin Franklin. This volume contains 3 short stories written by Isaac Asimov that appeared in The Saturday Evening Post in 1974. Benjamin Franklin's dreams of a nation of free men were vital to the birth of the United States. The ghost of Franklin learns that some of his dreams came true and that some are still elusive hopes. In these dreams he describes his visions of a Bicentennial worthy of the great American nation. REFERENCE: Fraser and Friedl, eds., John DePol: A Catalogue Raisonne, p. 53. (Inventory #: SFK519-050)
$25.00 add to cart Available from
John Howell for Books
Share this item

Los Angeles, CA : The Sterling Press , 1921
(click for more details about Man's Best Friend)
View all from this seller>