Report of the Superintendent of the Coast Survey, Showing the Progress of the Survey During the Year 1856. 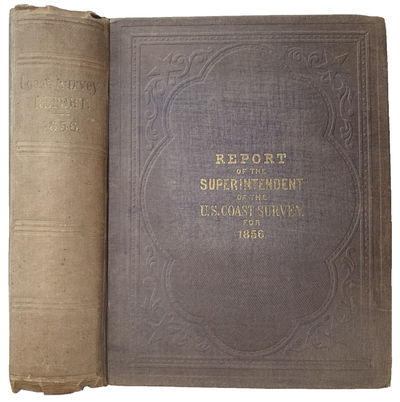 by U.S. House of Representatives.
Washington:: Cornelius Wendell, 1856., 1856. Series: House of Representatives, 34th Congress, 3d Session, Ex. Doc. No. 18. Thick 4to. xix, errata [1], 358 pp. 67 fold-out maps and diagrams, index; pages browned, some foxing, tears to plate No. 1 mended. Dark tan cloth, blind stamped decorative title borders on covers, gilt-stamped cover and spine titles; extremities rubbed. Bookplate: "With the compliments of Prof. A. D. Bache, Supt. U.S. Coast Survey". Very good. Scarce. "[Alexander Dallas] Bache is clearly one of the founders of the scientific community in the United States. His administration of the Coast Survey established a model for large-scale scientific organization that was followed either implicitly or explicitly by later groups. Bache and his close friend Joseph Henry established many of the patterns of interaction of science and the federal government. Perhaps most significant of all was the way pure science, in Bache's scheme of things, became the necessary antecedent and companion of applied science, rather than purely a philosophical endeavor." [DSB, I, p. 364]. "The primary aim of the Coast Survey was to furnish, with the fullest possible accuracy, all the geographical, topographical, and hydrographical data that may in any way be needed for the navigation and defence [sic] of the coast. . . These field operations involve heavy office work, reduction of observations, map-drawing, engraving, and printing. The scientific preparation, the practical knowledge, and the administrative talent, necessary for the successful conduct of operations of such magnitude and complexity could have been found in few men: it is not too much to say that Bache possessed all these requirements. . . By husbanding the strength at his disposal, Bache, who was a hard worker and genially encouraged hard work in others, widely extended the range of subjects originally embraced by the Survey: he organised magnetic observations, and recorded the meteorological data, earthquake phenomena, and, for a time, the appearance of Sunspots. . . His annual reports to Congress, increasing in extent and fullness as his labours neared completion, embrace an invaluable repertory of physical investigations, while they form a step-by-step history of the progress of a survey as certainly the most accurate as it is obviously the most extensive that has yet been produced or called for by any nation in the world." [C., J., "Obituary: Alexander Dallas Bache", Monthly Notices of the Royal Astronomical Society, Vol. 28, November 1867-June 1868, p. 73-74]. This voluminous work contains numerous maps, charts and diagrams illustrating the work and progress of the survey in the year 1856. Highlights include maps of several of the Channel Islands off the coast of California. No. 47 features "San Clemente island, harbor of refuge at southeast end" and contains a small lithographed sketch of the coastline by James Ackerman. No. 48 features "Anacapa and part of Santa Cruz island" and contains another small lithograph of Anacapa's most noticeable natural feature, the Arch Rock, a 40 ft high natural bridge. Of interest as well is No. 49, "Entrance to San Francisco Bay, (preliminary chart.)" which offers sailing directions and warns of several potential dangers to be avoided. (Inventory #: LLV1694)
$1700.00 add to cart Available from
Jeff Weber Rare Books
Share this item

The Book of Common Prayer and administration of the sacraments, and other rites and ceremonies of the church. With: A New version of the Psalms of David, fitted to the tunes used in churches. By N. Brady, D.D., and N. Tate, Esq.