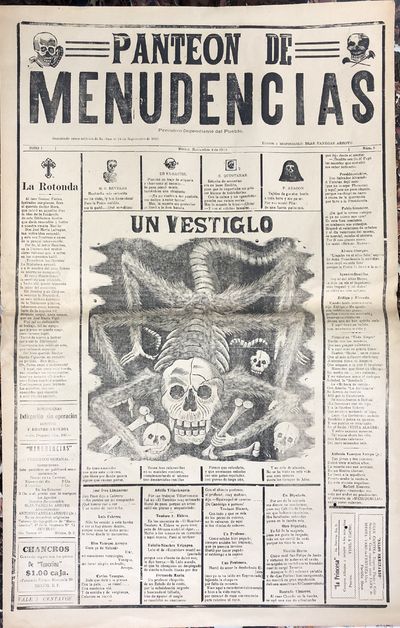 by Vanegas Arroyo, Blas
Mexico: Vanegas Arroyo, Blas. Very Good. 1919. A periodical in the form of a broadside featuring the work of Jose Guadalupe Posada; this is Tomo I, Num. 8 (Volume I, Number 8) , and is dated Mexico, Noviembre 2 de 1919. Broadside measures 23 ½" x 15", no content on verso. Broadside is printed on newsprint and has expected toning; four small (1/8") hole punches near right edge and one ¼" closed tear near center. The broadside features short vignettes written by famous people of Mexico City. Jose Guadalupe Posada (1852-1913) created the frightening image. Posada's last works of art portrayed the corruption in political life. "After Díaz's dictatorship, Victoriano Huerta assassinated the first legitimate president of Mexico, Francisco I. Madero, creating a wave of anger that became the catalyst for revolution. The piece entitled 'Huerta Calavera' portrays Huerta as a treacherous tarantula-like creature[Posada's] work etched the path of revolution; his draftsmanship and allegiance to the working class inspired the masters like José Clemente Orozco and Diego Rivera" (Station Museum of Contemporary Art). Only four copies in OCLC as of November 2019 (only two of these in the US). . (Inventory #: 019845)
$575.00 add to cart Available from
Back of Beyond Books
Share this item

by Yve-Alain Bois And Ed Ruscha And Walter Hopps