A Negro Explorer at the North Pole. 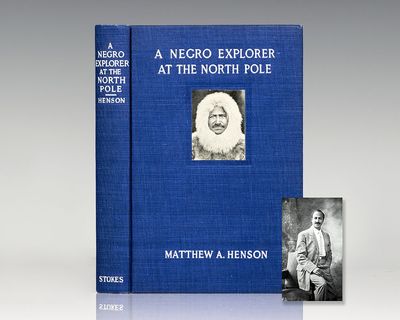 by Henson, Matthew A
New York: Frederick A. Stokes Co, 1912. First edition of this landmark work. Octavo, original blue cloth with portrait of Henson to the front panel, frontispiece, 3 double-sided leaves of plates. Foreword by Peary and an introduction by Booker T. Washington. In fine condition. Rare in this condition. Matthew Alexander Henson was the first African-American Arctic explorer, an associate of Robert Peary on seven voyages over a period of nearly 23 years. They made six voyages and spent a total of 18 years in expeditions. Henson served as a navigator and craftsman, traded with Inuit and learned their language, and was known as Peary's "first man" for these arduous travels. The first to break the color barrier at the Explorer's Club, Henson was also the only member of Peary's party to master the Inuit language and method of driving dog sleds. His only descendants are through his children with an Inuit woman, Akatingwah. (Inventory #: 77028)
$3800.00 add to cart or Buy Direct from
Raptis Rare Books
Share this item