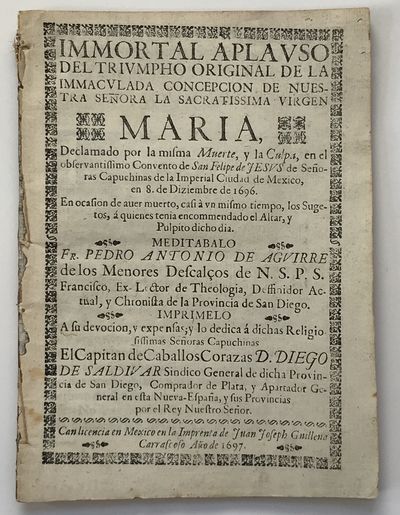 by Aguirre, Pedro, Antonio de
Mexico City: Juan Joseph Guilleno Carrasco, 1697. Very good.. [11],10 leaves. Small quarto. Dbd. Very light wear at edges. Small patch of worming at top edge, occasionally affecting text. Partial marca de fuego at bottom edge. Light tanning and foxing. Sole edition of this late 17th-century sermon on the subjects of the Virgin Mary and the Immaculate Conception, delivered at the Capuchin women's convent in Mexico City on the feast day of the Immaculate Conception, 8 December, 1696, and published the following year. Aguirre begins by saying that the joy of the occasion has been spoiled by the almost simultaneous deaths of Dr. Bernabe Diaz de Cordova y Murillo who was to have sung the mass and of Fr. Balthasar de Medina, who was to have preached. The overall message of the sermon addresses the relationship of the conception to original sin and death in Catholic thought. With an attractive title-page composed of several different text styles and a handful of woodcut ornaments within a woodcut border. We locate six copies of this rare Mexican imprint -- at St. Bonaventure, the University of Dayton, Indiana University, NYPL, JCB, and the National Library of Chile. Medina, Mexico 1660. Palau 3946. (Inventory #: 980)
$1,950.00 add to cart Available from
McBride Rare Books
Share this item