The PreHistory of the Far Side: A 10th Anniversary Exhibit 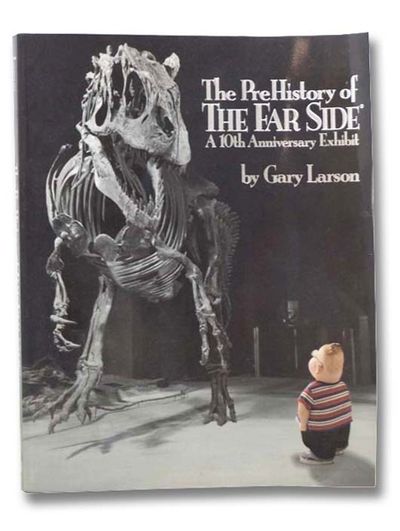 by Larson, Gary
Andrews and McMeel, 1990. Large Softcover. Very Good. Reprint. A few faint spots on front wrapper. 1990 Large Softcover. We have more books available by this author!. 288 pp. "Welcome to the exhibit: a spectacular retrospective of more than 300 Far Side cartoons - in both black and white and color. The exhibit is not Larson's most popular cartoons; it is his own personal favorites. And indeed, this is the first glimpse Larson's millions of fans worldwide have ever had of the personal side of Gary Larson. As Larson says in his Foreword, "This may or may not be of particular interest to anyone, but my therapist says it should do ME a lot of good." As with all great exhibits, it begins by putting The Far Side, and Gary Larson, in context. In the first section, "The Origin of the Species," we see Gary's childhood drawings, such as the one done in black crayon, of little Gary sitting on top of a tire, his earliest memory of riding in the car on vacation. The next documented section, "Evolutioon of the Species," gives the view the first insights into the creative process of Gary Larson. (He admits, for example, that "off days" are a part of life, whether you're a cartoonist, a neurosurgeon, or an air-traffic controller.) In this section we see cartoons that worked - and often, surprisingly, how he made them work better. Then there is the section called "Mutations," the ones that didn't work because somebody (no names heres) goofed up. And finally, leading up to the exhibit itself, the section "Stimulus/Response," in which Gary shares some of his fan mail: "You should be severely reprimanded by animal protection authorities, in newspaper publication, and, if possible... you should be fined at least $1,000 for each such cruel cartoon." And Larson's defense: Complaints are "usually from people who misinterpreted the cartoon and were angered by a cartoon they didn't 'get.' Well, hell - I don't understand all my cartoons." We also see never-before-published cartoons that landed on the editorial cutting-room floor. So here's the whole history of The Far Side, some ten odd years - from Mesozoic to Modern, from Early Weird to Late Weird. Only Larson thinks it may not be very interesting, but as he says, once "you've got it in your brain cells you're stuck with it. (Inventory #: 2294337)
$7.00 add to cart or Buy Direct from
Yesterday's Muse
Share this item
Yesterday's Muse, Inc.
Offered by