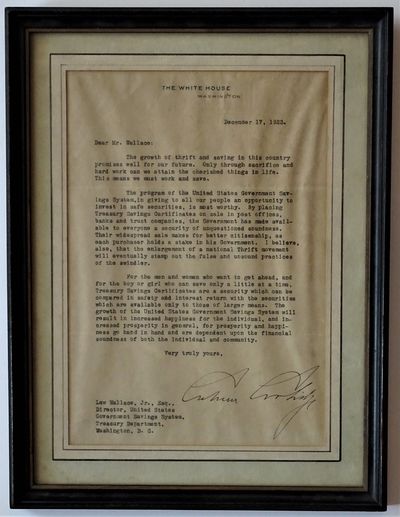 by Coolidge, Calvin
Washington, D.C.: The White House, 1923. December 17, 1923, The White House - to Lew Wallace, Jr., (son of Lew Wallace, Union general in the American Civil War, governor of the New Mexico Territory and author of "Ben Hur")- "Dear Mr. Wallace, The growth of thrift and saving in this country promises well for our future. Only through sacrifice and hard work can we attain the cherished things in life. This means we must work and save. The progress of the United States Government Savings System, in giving to all our people an opportunity to invest in safe securities, is most worthy. By placing Treasury Savings Certyificates on sale in post offices, banks and trust companies, the Government has made available to everyone a security of unquestioned soundness. Their widespread sale makes for better citizenship, as each purchaser holds a stake in his Government. I believe, also, that the enlargement of a national Thrift movement will eventually stamp out the false and unsound practices of the swindler." A 25 line, roughly 225 word letter that in the last paragraph goes on to talk about the growth of this system that "will result in increased happiness for the individual, and in increased prosperity in general." A Fine letter, under glass in period original frame and acquired directly from descendants of the Wallace family, never before offered for sale. A superb association and a letter that speaks directly to Coolidge's sense of personal responsibility and frugality. . One Page. Fine. 8 1/2 " x 11". (Inventory #: 007859)
$2,000.00 add to cart Available from
Dale Steffey Books
Share this item
Dale Steffey Books
Offered by

Berkeley : Shaman Drum/ Cranium Press , 1973
(click for more details about The Fudo Trilogy)
View all from this seller>