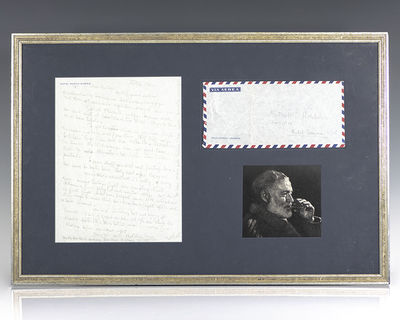 signed first edition
by Hemingway, Ernest
Autograph letter signed by and entirely in the hand of Ernest Hemingway to close personal friend and biographer Aaron E. "Hotch" Hotchner, an integral member of Hemingway's entourage during the "Dangerous Summer" of 1959. One page on Hotel Suecia-Madrid letterhead, the letter reads in full. "Dear Hotch: We'd figured out all the combinations of meeting and still making Zaragoza. But then got your wire departure delayed...Flight at Alicante is 6pm June 28th. We will meet at Carleton Hotel - (Biggest there) will leave tickets. To get to Alicante you can fly to Valencia and take taxi from there. But Bill [Nathan 'Bill' Davis] says best take taxi from here via Albacette. ALBACETTE Six hours hotel concierge can get good taxi. Costs 3 p. kilometer 800 (aller-retour) 2400 pesetas. Leave stuff you don't want for trip here. We will be back July 2 after Burgos. Guess that's about all. Terribly sorry you missed today's fight. Am sweating it out. Antonio in fine physical and mental shape. But this is his first fight with Luis Miguel since L.M. retired and it is rough to make your comeback fight after such a bad wound. Am also betting but not heavy on the Swede [Ingemar Johansson] S...bet a grand on him at 4/1 and thinks he should make it...See you soon Hotch. Wish we were meeting you and driving up together. Love, Papa. We have Salmon pink English Ford with Gibraltar license plates E H." With the original envelope addressed in Hemingway's hand. Hemingway first met Aaron Edward Hotchner in the late 1940s when Hotchner was sent to Cuba by Cosmopolitan to solicit from Hemingway an article on "The Future of Literature." Hemingway took an immediate liking to Hotchner and they remained close friends; Hotchner edited the manuscript of Across the River and Into the Trees, acted as Hemingway's agent in several deals concerning screen adaptations of his novels, and edited Hemingway's last significant original work, The Dangerous Summer. In 1966 Hotchner published his profound and intimate biography, Papa Hemingway, which would go on to become a bestseller. In near fine condition. Matted and framed with a photograph of Hemingway. The entire piece measures 24 inches by 16 inches. Contracted by LIFE MAGAZINE to write an article on bullfighting, Hemingway embarked on a three-month bacchanal of bullfights and late nights. He spent much of the summer with Antonio Ordonez, a leading bullfighter whose father he had immortalized under the name Pedro Romero in The Sun Also Rises. Ordonez had arranged to perform a series of mano a mano corridas against his brother-in-law Luis Miguel Dominguin but was seriously gored late May. His wound put him out of action for a month during which Hemingway, convinced that his presence was essential to the matador's recovery, staved by Ordonez's side. Hemingway's research was published in three consecutive installments in LIFE throughout December of 1960. Hotchner played an essential role in trimming the excessive manuscript of 120,000 words (for the assignment which called for a 10,000-word article) down to 50,000 words. "The Dangerous Summer" proved to be Hemingway's last significant original work and was published in book form posthumously in 1985. (Inventory #: 107835)
$9200.00 add to cart or Buy Direct from
Raptis Rare Books
Share this item