History of the Indian Tribes of North America . . . 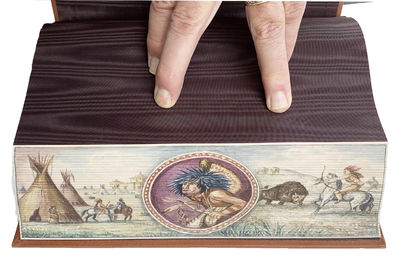 by [Fore-edge Painting] MCKENNEY, Thomas L. (1785-1859); HALL, James.
Kent:: Volair Lmtd., 1978., 1978. 2 vols. Large 8vo. xxviii, 470; iii-vii, [2], 534, [6] pp. 68 + 55 color portraits or scenes on plates, 1 portrait of an author, 2 maps. With two fore-edge paintings painted by Martin Frost, signed with his initials MF. The scenes depict American Indians in five vignettes: teepees set up in front of a western (army) fort, an Indian warrior in a central medallion portrait, a bison hunting scene with an Indian on horseback; on the second volume is a two-part scene of an Indian war dance, split by a medallion portrait of an Indian woman with a noble face and traditional, beads, earrings, etc. EXTRA POSTAGE WILL APPLY. (Inventory #: FF2464)
$950.00 add to cart Available from
Jeff Weber Rare Books
Share this item

A Statement of the Claims of Charles T. Jackson, M.D. to the discovery of the applicability of sulphuric ether to the prevention of pain in surgical operations.

Report on the epidemic small pox and chicken pox which prevailed in New-York during the last autumn and winter. Explanatory of the causes of supposed failures of the vaccine disease. Ordered by the Medical Society of the City and County of New-York, at their quarterly meeting, January 1816.

by Medical Society of the County of New York.