A Dialogue with Wood Engraving. With an Introduction by the Artist. 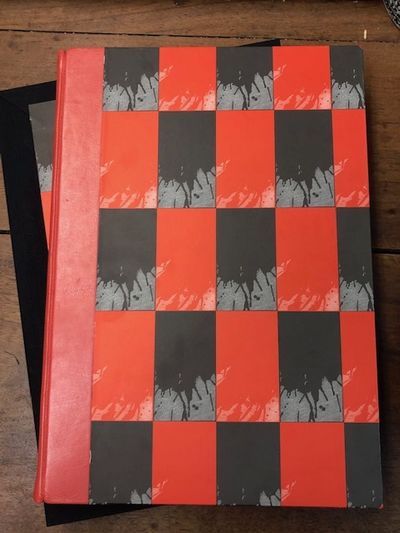 by Wagener, Richard
Vancouver, British Columbia:] Barbarian Press, 2019 Endgrain Editions 5. One of 80 deluxe copies in a total edition of 130. The deluxe copies are bound in quarter red morocco and include a slipcase and a signed proof of the book's frontispiece. Patterned paper-covered boards in red, black, and white, quarter red morocco. With spine label lettered in gilt. Housed in a black cloth slipcase paneled with patterned paper matching the book's covers. . Folio. With 75 wood engravings by Richard Wagener, 15 of which are in color, all printed from the original blocks. Each image is accompanied by a date (from 1983 to 2018), title, and caption. Two of the engravings are fold-out panoramas of Yosemite landscapes. Text printed in black and red using Eric Gill's Joanna typeface on Zerkall paper. Includes a tipped-in frontispiece and an additional proof of the frontispiece, signed and numbered in pencil by Richard Wagener and housed in a large black envelope. A fine copy. A Dialogue with Wood Engraving is a retrospective on the nearly four-decade career of California-based engraver Richard Wagener (b. 1944). The introduction by Wagener, along with his captions and epigrams, narrate and illuminate his work: the epigram that accompanies his piece Migration (2007) reads "I think in wood." (Inventory #: 16690)
$1,500.00 add to cart or Buy Direct from
Michael R. Thompson Rare Books
Share this item
Michael R. Thompson Rare Books
Offered by

Something New on Men and Manners, a Critique on the Follies and Vices of the Age; interspersed with amusing anecdotes, biographical sketches, and useful suggestions

Hailsham, [England]: : G. Breads, , 1828
(click for more details about Something New on Men and Manners, a Critique on the Follies and Vices of the Age; interspersed with amusing anecdotes, biographical sketches, and useful suggestions)

The Romance of the Association; or, One Last Glimpse of Charlotte Temple and Eliza Wharton. A curiosity of literature and life.

Cambridge [Mass.}: : Press of John Wilson and Son, , 1875
(click for more details about The Romance of the Association; or, One Last Glimpse of Charlotte Temple and Eliza Wharton. A curiosity of literature and life.)
View all from this seller>