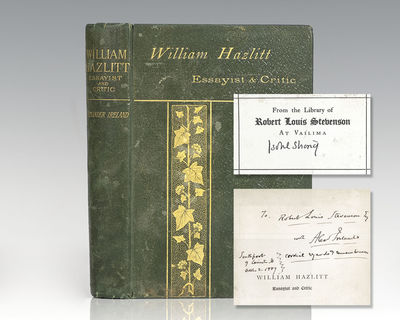 by Ireland, Alexander. [Robert Louis Stevenson]
London and New York: Frederick Warne and Co, 1889. Robert Louis Stevenson's first edition copy of the writings of one of his favorite prose writers, William Hazlitt. Octavo, original cloth with gilt titles to the spine and front panel, botanical gilt vignette to the front panel, tissue-guarded frontispiece of Hazlitt. Presentation copy, inscribed by the author to Robert Louis Stevenson on the half-title page, "To Robert Louis Stevenson Esq with Alex Ireland's cordial regards & remembrances Southport 9 Leicester St. October 2, 1889." With Stevenson's Vailima bookplate to the pastedown which is singed by Stevensons stepdaughter Isobel Strong. In very good condition. An exceptional presentation. A great admirer of Hazlitt's prose style, Steveson frequently discussed with friedns his interest in writing Hazlitt's biography. But it is in his Walking Tours, that Stevenson gives his warmest expression of his admiration for the great romantic essayist: "I should wish to quote more for though we are mighty fine fellows noawadays, we cannot write like Hazlitt. And Hazlitt's essays would be a capital pocket-book on such a journey" (Stevensonia, 92). (Inventory #: 104876)
$4,000.00 add to cart or Buy Direct from
Raptis Rare Books
Share this item

by Elizabeth, Queen and Prince Philip

by Elizabeth, Queen and Prince Philip

1966
(click for more details about Queen Elizabeth and Prince Philip Signed Christmas Card.)
View all from this seller>