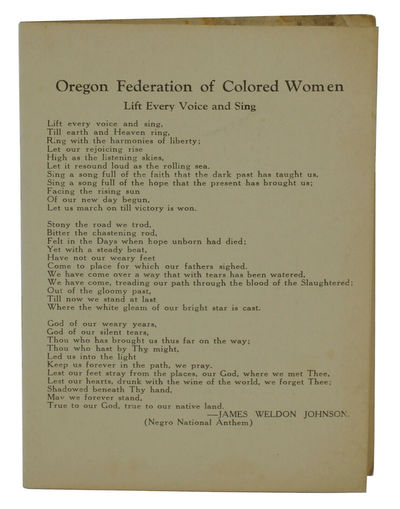 by [Johnson, James Weldon]
[Portland, OR?]: Oregon Federation of Colored Women. Very Good. [ca. 1920s]. A single sheet, folded once. Very Good. Folded askew, with some staining and light creasing. A collection of four hymns starting with "Lift Every Voice and Sing" by James Weldon Johnson. It is referred to as the "Negro National Anthem" here, which likely dates this hymnal to 1919 or later, as it was declared thusly by the NAACP on that date. The other hymns are "Lifting As We Climb," "Steal Away," "Swing Low Sweet Chariot." No copies located in recent OCLC or ArchiveGrid searches. A scarce survival of the Portland-based organization Oregon Federation of Colored Women, which apparently was better known as Oregon Federation of Colored Women's Clubs. The group began as the Lucy Thurman Temperance Union in 1912; it merged with nine other groups and adopted the OFCWC moniker in 1917. According to a 1993 City of Portland history of the local African American community, the purpose of the organization was "to promote the education of women and girls, to raise the standards of the home, to work for the moral, economic, social and religious welfare of women and children, to protect the rights of women and children, to develop capacities for leadership, to secure and enforce civil and political rights for the race, united service to the community and to promote interracial understanding." Modernist muralist Thelma Johnson Streat exhibited a painting with the society when she was 17. By 1988, the name had changed to the Oregon Association of Color Women's Clubs. (Inventory #: 140939185)
$150.00 add to cart Available from
Burnside Rare Books
Share this item
Burnside Rare Books
Offered by

London : J. Johnson , 1798
(click for more details about The Memoirs of The Author of A Vindication of The Rights of Woman)
View all from this seller>