Harold and the Purple Crayon. 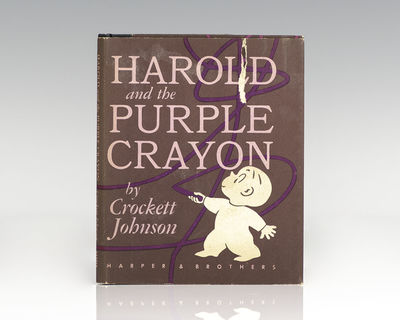 by Johnson, Crockett
New York: Harper & Brothers, 1955. First edition of the first book in Crockett Johnson's Harold series. 12 mo, original half cloth, illustrated throughout. Fine in a very good dust jacket without the price to top of front flap, with code "30-60 / No. 5671A" to front flap and "No. 5672A" to rear flap. Crockett Johnson--a pen name for David Johnson Liesk--was "a cartoonist whose simplest, sparest and boldest outlines produced unforgettable, gently humorous and always endearing caricatures... His natural gift for drawing and writing from a young child's viewpoint enabled him to craft more than 20 juvenile books," including this, his most popular one. "With the fewest of lines, Johnson depicts Harold as a toddler clad in sleepers, his chubby hand gripping a fat plum-colored crayon. From page to page, the thick, firm, purple mark delineates Harold's actions against the stark white background so effectively and ingeniously that the crayon is as much a character as Harold. The same economy that informs Johnson's art permeates his text; he writes so concisely of Harold's moonlight stroll that his style perfectly echoes the clarity of his boldly outlined cartoon illustrations" (Silvey, 355). (Inventory #: 107552)
$4200.00 add to cart or Buy Direct from
Raptis Rare Books
Share this item