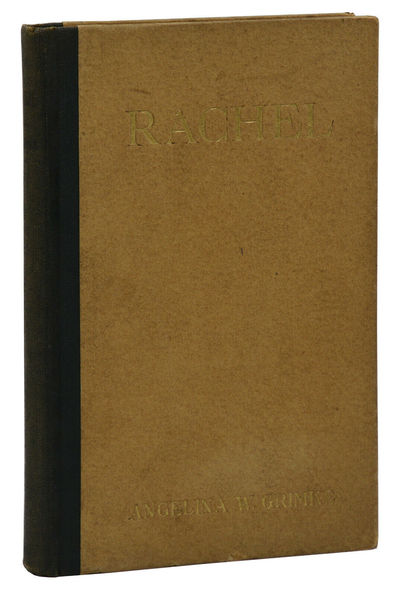 by Grimke, Angelina W.
Boston: The Cornhill Company, 1920. First Edition. Near Fine. First edition, first printing. Bound in publisher's brown paper covered boards over black cloth spine, stamped in gilt. Near Fine. Spine cloth faded with titles on spine mostly illegible. Light soiling. Front inner hinge repaired, small stray mark to front free endpaper. Light offsetting to rear blank sheets from four-leaf clover laid in. Rachel is generally accepted as the first published and produced play by an African American woman; it originally ran in 1916 at Myrtill Miner Normal School in Washington, D.C. The playwright was an important figure in the Harlem Renaissance. Some of her work suggests she may have been a lesbian, with much stronger undertones found in her unpublished poems sparking speculation, implying she may have lived a life of "personal and creative" suppression. (Inventory #: 140939202)
$2000.00 add to cart Available from
Burnside Rare Books
Share this item
Burnside Rare Books
Offered by

Imperial Spoils: The Curious Case of the Elgin Marbles