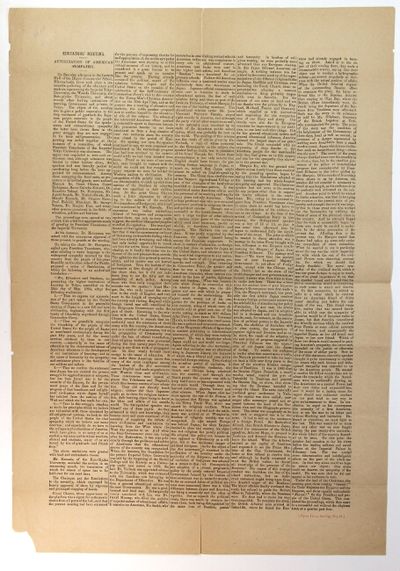 [Tokyo]: Japan Times, 1904. Large broadside, approx. 21" x 14"; text in 5 columns; printed without border; "(Japan Times, Sunday, May 29)" printed in red in small type at lower right corner. Thin paper uniformly browned and split in 2 up the central fold. Likely included as a premium in the Sunday paper. Lengthy, detailed account of a large public meeting of students and educators held on May 28, 1904, in the Lecture Hall of the Higher Commercial School, Hitotsubashi. Speakers express profound appreciation for the friendship of the United States over the previous fifty years and, especially, its solidarity with Japan in its current struggle with Russia, war having been declared just three months earlier. Much in praise of Perry and on salutary influence of the United States on the Japanese educational system and culture generally. Hitotsubashi University is today the only Japanese institution of higher learning to specialize in the human sciences. Not in OCLC. (Inventory #: 55597)
$316.25 add to cart or Buy Direct from
Rulon-Miller Books
Share this item