A sermon, preached April 29, 1789, by James Dana, D. D. at his installation to the pastoral care of the first church and congregation in the city of New-Haven 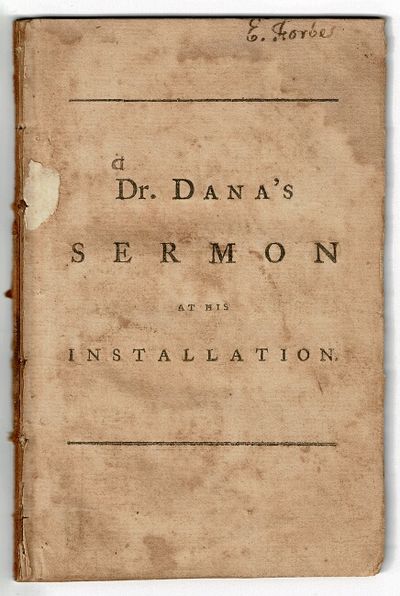 by Dana, James
New-Haven: printed by Thomas and Samuel Green, 1789. First edition, small 8vo, pp. 43, [1]; removed from binding; half-title loose, but present; slight toning, title page trimmed close at the top just touching the incipient 'A'; all else very good. Dana (1735-1812) was early on involved in a controversy between the Old and New Light factions of the Congregational Church, but prejudices against him waned when he took up the cause of American Independence; his sermons were ostensibly responsible for winning many to his support. Evans 21782; Trumbull 546. (Inventory #: 55638)
$143.75 add to cart or Buy Direct from
Rulon-Miller Books
Share this item

Letters to a pagan

Detroit : Robert Bruna Powers [Laughing Dragon Books] , 1933
(click for more details about Letters to a pagan)
View all from this seller>