Kit Carson: A Portrait in Courage 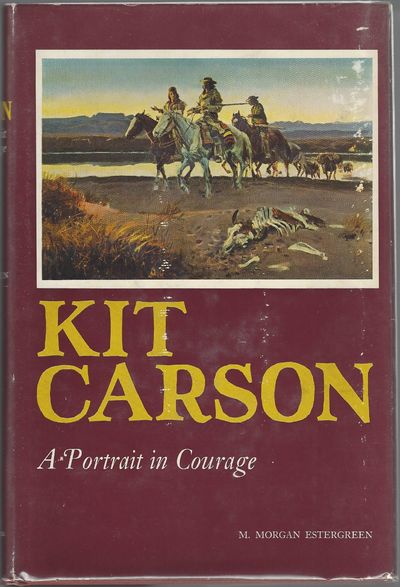 by Estergreen, M. Morgan
Norman, OK: University of Oklahoma Press, 1962. First Edition. 320pp. Octavo [23.5 cm] Rust colored cloth. Near fine/Near fine. Jacket is price clipped. "Kit Carson's life story is, in essence, the story of the West as that region developed over the first three quarters of the nineteenth century. As such, then, Kit's life symbolizes the story of the American fur trade; of buffalo hunting and beaver trapping; of Indian tribes and Indian wars; of the annual rendezvous in mountain meadows; of the immigrant, the pathfinder, the soldier, and the seeker after gold - all following the Santa Fe, Spanish, Oregon, and California trails; of cantonment, Indian trading posts, and an adobe castle on the Arkansas River; of the caravan, the pack train, the oxcart, the overland stage, and the express by pony; of the conquests of Oregon, New Mexico, Texas, and California; of a wild and unknown West finally explored and conquered; of the march ever westward until the land from the Atlantic to the Pacific was under one flag." - from the foreword. (Inventory #: 652)
$25.00 add to cart Available from
Tschanz Rare Books
Share this item