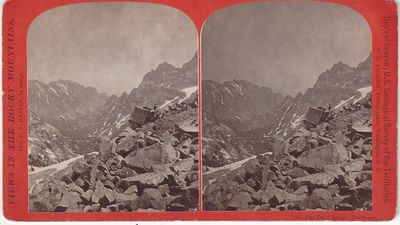 by Jackson, William Henry
New York: E. & H.T. Anthony & Co, 1872. Stereoview. Albumen photograph [9.5 cm x 15.5 cm] on an orange 'Views of the Rocky Mountains - Dep't of Interior, U.S. Geological Survey of the Territories' mount [10 cm x 18 cm] Printed Anthony back stamp. Minor rubbing to extremities. Image has strong contrasts. This photograph was taken by Jackson as part of his duties as the official photographer of the Hayden survey. "This side trip to the Tetons was really secondary to the main objective of the expedition, but by this time the Yellowstone had lost something of its novelty, and the Tetons, never before photographed, now became of the first importance, so far as I was concerned." - William H. Jackson In 1870 Dr. Ferdinand Vandiveer Hayden invited Jackson to become the official photographer of the United States Geological and Geographical Survey of the Territories. Jackson remained with the Survey until 1878, working closely with the artist Thomas Moran and others. The official report of the Survey for 1875 stated of Jackson's photographs: "They have done very much, in the first place, to secure truthfulness in the representation of mountain and other scenery. (Inventory #: 2884)
$125.00 add to cart Available from
Tschanz Rare Books
Share this item

by Automobile Club of Southern California

[Salt Lake City] : [The Church of Jesus Christ of Latter-day Saints] , 1939
(click for more details about Segolia - My History [Manuscript])
View all from this seller>