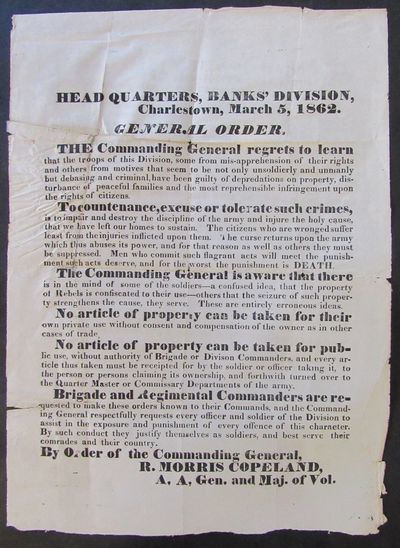 General Nathaniel P. Banks, via Assistant Adjutant General & Major of Volunteers R. Morris Copeland, condemns the actions of troops for "depredations on property, disturbance of peaceful families and the most reprehensible infringement upon the rights of citizens" and warns of the consequences:

"To countenance, excuse or tolerate such crimes, is to impair and destroy the discipline of the army and injure the holy cause, that we have left our homes to sustain. The citizens who are wronged suffer least from the injuries inflicted upon them. The curse returns upon the army which thus abuses its power, and for that reason as well as others they must be suppressed. Men who commit such flagrant acts will meet the punishment such acts deserve, and for the worst the punishment is DEATH."

The Alaska Book: Story of our Northern Treasureland. Signed Copy.

by Gruening, Ernest & others.

The Roar of the Crowd: The True Tale of the Rise and Fall of a Champion. Signed Copy

by Corbett, James J., with Foreword by Robert Gordon Anderson

New York & London : G.P. Putnam's Sons , 1925
(click for more details about The Roar of the Crowd: The True Tale of the Rise and Fall of a Champion. Signed Copy)
View all from this seller>