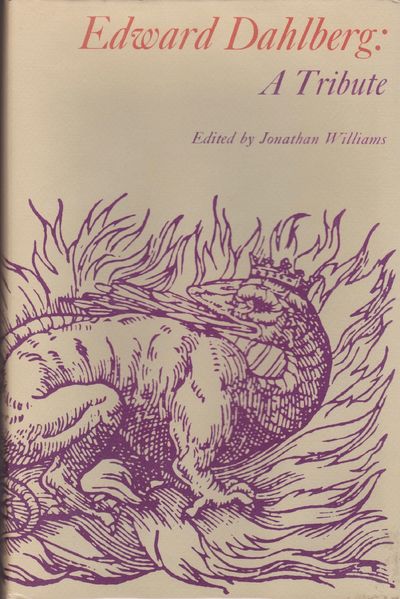 by Williams, Jonathan [Editor]
New York: David Lewis, Inc., 1970. First Edition Thus. Small 4to (9 1/2 x 6 1/4 inches; 250 x 157 mm), 196 pages, in publisher's brown cloth, titles in gilt to spine, in an illustrated dust jacket.SIGNED by Edward Dahlberg on the half title, a Festschrift celebrating the life of the prolific essayist and novelist, who lived from 1900 to 1977. With a staggering number of contributors, such as Anthony Burgess, Josephine Herbst, Allen Tate, August Derleth, Thomas Merton, Muriel Rukeyser, Jack Kerouac, and many others. The book first appeared as TriQuarterly 20 in Fall 1970. SCARCE SIGNED.

CONDITION: Internally clean, bright, and unmarked. Some fading to the jacket extremities and spine, couple of nicks to the jacket flaps. Near Fine. (Inventory #: 2098)
$193.00 add to cart Available from Le Bookiniste
Share this item