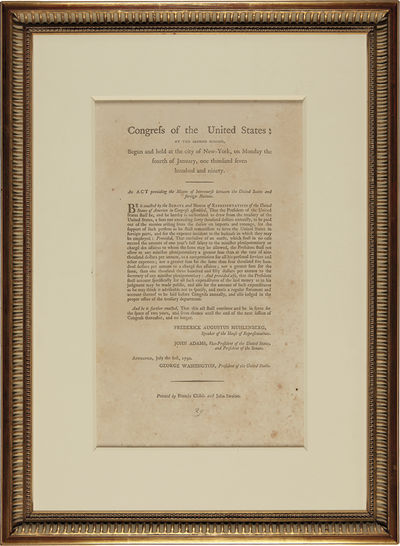 by [United States Foreign Service]
[New York]: Printed by Francis Childs and John Swaine, 1790. Broadside, 12 1/2 x 7 1/4 inches visible within the mat. Removed from a sammelband volume, with stab holes along left edge. Lightly tanned and foxed. Very good. Matted and framed. The very rare printing of the act establishing the Foreign Service of the United States, thereby creating and funding the system through which the U.S. conducts its relations abroad. The law was approved on July 1, 1790 and is signed in print by George Washington as president, John Adams as vice president, and Speaker of the House Frederick Muhlenberg. The Act authorizes the President to draw from the Treasury an annual amount, not to exceed forty thousand dollars, for the purpose of paying foreign service officers abroad, including ministers plenipotentiary (ambassadors) and other officials. The funds for the annual budget are "to be paid out of the monies arising from the duties on imports and tonnage." The act further stipulates that the salary of a minister plenipotentiary is not to surpass $9,000 per year, "for all his personal services and other expences." The salary of a CHARGÉ D'AFFAIRES is capped at $4,500 per year, and that of any secretary to a minister plenipotentiary should not exceed $1,350 per year. It is through this act that the formal system for establishing and paying a corps of Foreign Service officers was established. These officers, the first official emissaries of the State Department, represented the United States in the capitals of Europe. If the salaries seem somewhat high, it is because the ministers were responsible for paying all the expenses relating to their office, including lodging and offices abroad, office staff, etc. The American Foreign Service, established by this act, remained somewhat small for several decades, with ambassadors in only the major European capitals. Not in Evans. NAIP locates only three copies, at the Huntington Library, Library of Congress, and South Carolina Archives. A rare and important early law, creating and funding the system that established an American diplomatic presence abroad. BRISTOL B7577. SHIPTON & MOONEY 46055. ESTC W14355. (Inventory #: WRCAM38533)
$32,000.00 add to cart or Buy Direct from
William Reese Co. - Americana
Share this item