PICTURESQUE ILLUSTRATIONS OF BUENOS AYRES AND MONTE VIDEO, CONSISTING OF TWENTY=FOUR VIEWS: ACCOMPANIED WITH DESCRIPTIONS OF THE SCENERY, AND OF THE COSTUMES, MANNERS, &c. OF THE INHABITANTS OF THOSE CITIES AND THEIR ENVIRONS 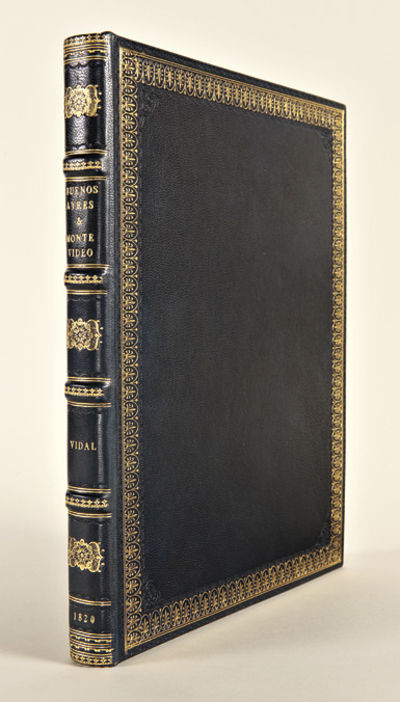 by Vidal, E.E.
London: Published by R. Ackermann, 1820. xxviii,115pp. plus twenty-four colored aquatints (including one double-sheet and three folding). Large quarto. Antique-style blue morocco, boards tooled in gilt and blind, spine gilt with raised bands, a.e.g. Minor staining in lower margin and tape repair to verso of one folding plate. Occasional marginal thumbsoiling, minor offsetting, but on the whole quite clean internally. A very good copy, handsomely bound. A superbly illustrated work about the people and places of Buenos Aires and Monte Video, with striking colored aquatints by the prominent engraver and publisher, R. Ackermann, making this one of the premier South American view books. Some of the scenes, people, and places depicted are: "Monte Video," "Church of San Domingo," "Beggar on Horseback," "Pampa Indians," "General View of Buenos Ayres, from the Plaza de Toros," "Balling Ostriches," "Guachos [sic] (Rustics) of Tucuman," and "A Horse Race." Also depicted are representative inhabitants of the Pampas and Rio de La Plata regions, and picturesque views of outdoor markets and plazas. Originally issued in six monthly parts, the work was then offered in book format, apparently bound first in boards, and in a later issue bound in half leather. Abbey follows Tooley in suggesting that there were apparently four issues (all with the same title and plates, and all with the same 1820 watermarks), but he provides no satisfactory manner of differentiating the editions; and consequently, aside from the original issue in six separate parts, there is no means of establishing issue priority. At the time of publication, Ackermann announced the production of 750 regular paper copies and fifty large-paper copies. "In 1820 began a series of books dealing with travel and scenery. The first was PICTURESQUE ILLUSTRATIONS OF BUENOS AYRES AND MONTE VIDEO, with descriptions of scenery, customs, and manners by E.E. Vidal. The book was issued in six monthly parts, seven hundred and fifty copies on elephant paper, and fifty on atlas....The twenty-four aquatints, all after drawings by Vidal, four of them being large folded plates, are engraved by G. Maile, J. Bluck, T. Sutherland, and D. Havell...[and] possess a subtle charm of their own apart from their historical and geographical value" - Hardie. Aside from its perplexing publishing history, this book remains a beautiful pictorial record of early 19th-century life. ABBEY 698. SABIN 99460. TOOLEY (1954) 495. THOMSON 31. COLAS 3000. PALAU 363371. BRUNET V:1182/83. HILER, p.878. PRIDEAUX, pp.335, 375. HARDIE, ENGLISH COLOURED BOOKS, p.107. (Inventory #: WRCAM55021)
$10,000.00 add to cart or Buy Direct from
William Reese Co. - Americana
Share this item