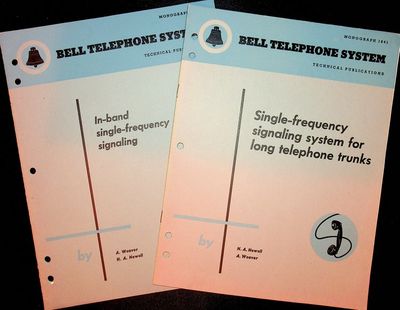 We offer here the first major paper published in January 1955, and a preceding paper which laid the foundations for it. Both are first separate editions in the Bell Telephone System Monograph series.

When local telephone exchanges evolved to support long distance calls, it was necessary to develop new protocols (electrically) to support these calls which were then routed through several telephone systems. In-band single frequency signaling was one such protocol - it allowed transmission of call related information to be passed from one telephone switch to the next to the next (and so on), as well as information necessary at the end of the call (person called hung up the phone, etc). In-band refers to sending these signals "in-band" meaning using the same phone line as the voice conversation was transmitted on. (later systems used "out of band" systems such as SMDI to transmit call related information but importantly not in the voice path).

The fact that the signaling information was on the same phone line as the voice transmission opened up the nascent long distance phone business to hackers (called Phone Phreakers) who were (in some cases) interested in learning about how the phone system was put together. Others, (black hats in today's parlance) were more interested in toll fraud - calling using the telephone system for free. In those days, long distance calls were expensive, and getting around "The Man" (the telephone company) was a game played much like that played today. This contest evolved because the telephone system providers, by definition, had to tell others how the signaling system worked or risk incompatibilities in the system.

COLLECTORS NOTE: The Bell System Monograph series is not an offprint series although it is often incorrectly referred to in this manner. It was rather a publication of Bell Telephone Laboratories used to widely distribute (primarily to libraries and large corporations) research articles written by Bell System employees in a variety of widely dispersed publications (including but certainly not limited to the Bell System Technical Journal). The series therefore represents a much broader selection of Bell System research than the Bell System Technical Journal did. Collectors prize this series as they are often (but not always) the first separate appearance of a paper and hence are the closest one can get to the elusive and ever sought after offprint. (Inventory #: 27587)
$1,375.00 add to cart or Buy Direct from Kuenzig Books
Share this item

Travels in India by Jean Baptiste Tavernier Baron of Aubonne in Two Volumes Vol. II [ ONLY ]

London : Macmillan and Co , 1889
(click for more details about Travels in India by Jean Baptiste Tavernier Baron of Aubonne in Two Volumes Vol. II [ ONLY ])

The Atlantic : A Preliminary account of the general resuilts of the Exploring Voyage of H.M.S. "Challenger" during the year 1873 an the early part of the year 1876 ... In Two Volumes Vol I. [ ONLY ]

New York : Harper & Brothers, Publishers , 1878
(click for more details about The Atlantic : A Preliminary account of the general resuilts of the Exploring Voyage of H.M.S. "Challenger" during the year 1873 an the early part of the year 1876 ... In Two Volumes Vol I. [ ONLY ])
View all from this seller>