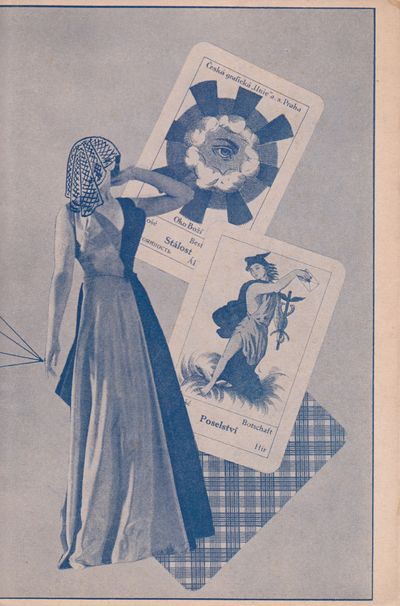 by Brouk, Bohuslav and Karel &#268;erný, designer
Prague: self-published, 1941. Small octavo. Original illustrated card wrappers; 20, [1] pp. Some underlining in blue ink in text. Striking photo-illustrated design by Karel Černý. A fine copy. Bohuslav Brouk (1912-1978) was a Czech psychoanalyst, philosopher, art theoretician, and writer. He was one of the first promoters of Freud's work in Czechoslovakia, a close friend of Karel Teige, and a co-founder of the Czech Surrealist Group in 1934. Considered one of the most original minds of the Czech avant-garde, he was also seen as its enfant terrible. Brouk's postscript for Štyrský's Emily Comes to Me in a Dream (1933), a defense of erotic literature, revealed his great interest in sexual freedom, individual creativity, and modern artistic tendencies. His research in the early 1930s focused on topics such as masturbation, sexology, and fetishes, and his works were often censored. With a trenchant wit and rhetorical talent, he set out to destroy what he saw as everyday myths that make a meaningless existence bearable: ethics, work, sport, and marriage, among others. After the war, he was an outstanding public critic of communist ideology and fled the country after the 1948 coup. The present work is one of six smaller pamphlets privately published as gifts to Brouk's friends and not offered for sale. They all feature striking cover designs by Toyen, Štyrský, and Černý. This work features a fine photo-montage design by the painter Karel Černý. As of November 2019, KVK and OCLC only show one copy in North America. (Inventory #: P5043)
$1,250.00 add to cart or Buy Direct from
Bernett Penka Rare Books
Share this item