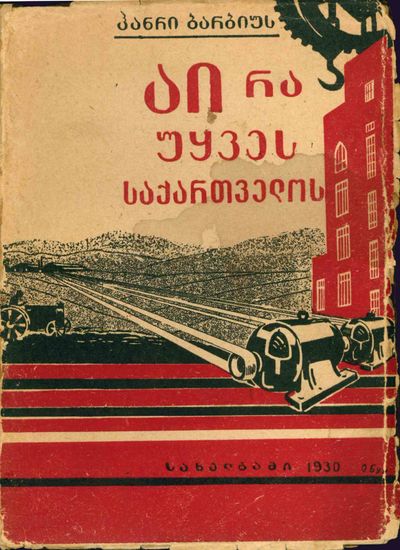 by Barbusse, Henri (Hanri Barbius) and Aristo Chumbadze, translator
Tbilisi: Sakhelgami, 1930. Octavo (17.6 × 12.5 cm). Original pictorial wrappers (signed "O. Bur" in Cyrillic); 278, [3] pp. Wrappers professionally restored preserving part of spine strip; light overall wear; stain to front wrapper; internally very good. First and only edition of the Georgian translation of Henri Barbusse's account of post-revolutionary Georgia, published shortly after the French original appeared. "In his 1928 book Voici ce qu'on a fait de la Géorgie, Barbusse praised post-sovietization political, social, and economic conditions in Georgia, triggering a critical response from the Georgian émigré Dathico Charachidze who published in 1929 Barbusse, les Soviets et la Géorgie, with a sympathetic preface by Karl Kautsky" (Wikipedia). One of 2000 copies printed. Chepyzhov 83 ("Although Barbusse's work can be viewed as a great example of Socialist Realism... the cover of the book tells a different story. The Constructivist style of the design by O. Bur reveals that art was in a transitional period, and this works sits between fading Constructivism and emerging Socialist Realism, mixing elements of the two"). As of November 2019, not in KVK or OCLC. We can only trace the copy at the Georgian National Parliamentary Library. (Inventory #: P6002)
$950.00 add to cart or Buy Direct from
Bernett Penka Rare Books
Share this item