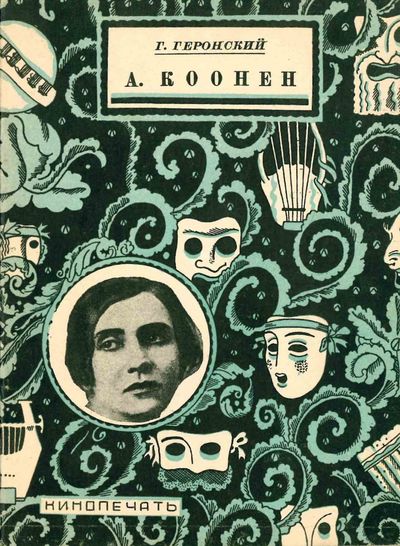 by Geronskii, G. I.
Moscow-Leningrad: Kinopechat', 1927. Octavo (17.3 Ã— 12.9 cm). Original pictorial wrappers; 32 pp. Numerous black and white photographs throughout. Very good or better. This fan biography of the Russian and Soviet stage actress Alisa Koonen (1889-1974) aims to distance the actress from her bourgeois roots and her beginnings in decadent pre-revolutionary theater, and to establish her good Soviet standing. Born into the family of a Belgian lawyer, Koonen's greatest talent was for tragedy and melodrama, two politically problematic facts in post-revolutionary Russia, which are glossed over in this biographical sketch. The author asserts that Koonen, who was a student of Stanislavsky (and later married to the Soviet theater innovator Aleksandr Tairov) was saved by her childhood experiences in the Russian village and thus swayed toward realism in her acting. The booklet was published by the NEP-era publishing house Kinopechat' 1925-1927 (later Teakinopechat' 1927-1929), which made most of its profits from the sales of fan post cards of domestic and foreign film stars, as well as biographical sketches such as this one. By 1929, the sale of such 'bourgeois materials' caused a scandal at the publishing house and the publisher started printing more politically minded literature on "kinofikatsiia derevni" (the spread of the cinema into the villages). As of October 2019, KVK and OCLC show four copies in North America. (Inventory #: 50315)
$250.00 add to cart or Buy Direct from
Bernett Penka Rare Books
Share this item