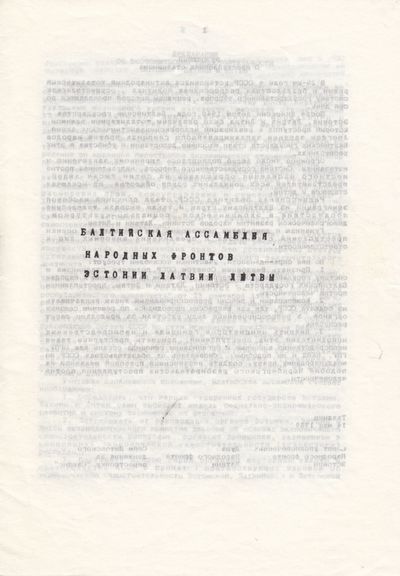 [Tallinn: self-published, 1989]. Octavo (20 × 14 cm). Original staple-stitched self-wrappers; xerox-reproduced reduced typescript; 14 pp. Very good. An important, anonymously published brochure which summarizes the results of the first meeting of the Baltic Assembly on May 13-14, 1989 in Tallinn, a key step in the independence movement of the three Baltic states. The meeting led to an unprecedented act of solidarity and non-violent public protest against Soviet power, the so-called "Baltic Way," a human chain of approximately two million people who joined their hands to connect the three states (August 23, 1989). The assembly ultimately became a key event that led to the independence of the Baltics and the eventual dissolution of the Soviet Union. This brochure, printed on thin semi-translucent stock apparently using a reduced-size computer font, reproduces various speeches and conclusions of the Assembly. It was one of the first times that Soviet politicians explicitly denounced the violence, crimes, and imperialist aims of the Stalinist regime and its inheritors as being fundamental to the Soviet state. For instance, the "Declaration of the Rights of the Baltic Nations" states that "The Baltic Assembly believes that genocide is an inseparable part of Stalinist politics" (p. 4).One of 2000 copies printed, based on the description of the copy held by the Russian State Historical Library. Rare; as of September 2019, no copies located in KVK or Worldcat. (Inventory #: 50258)
$750.00 add to cart or Buy Direct from
Bernett Penka Rare Books
Share this item