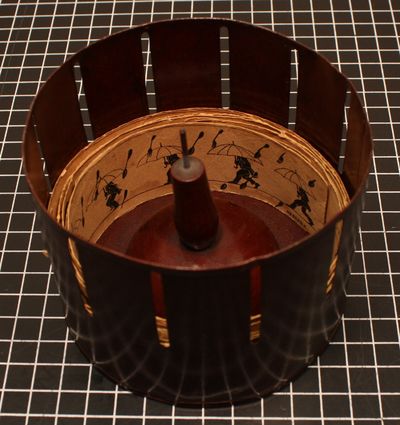 Germany: Dep. G. C. & Co N, [ca. 1900-1910]. Tin drum, painted light brown, with 13.5 cm diameter, with removeable wooden base (total height of 17 cm). The drum features 12 vertical apertures. Included are five double-sided animated strips, each 44 cm long, which are used to line the cylindrical drum, printed in stark blank, with different designs to rectos and versos; German manufacturer's imprint to lower margins. The strips somewhat tanned; else a very well preserved and fully functional set. A fine example of a somewhat later model of the long-popular zoetrope device, which allows for viewing a motion sequence broken down into individual phases. By looking through the aperture slits and spinning the drum one makes the various animation subjects come to life. The zoetrope is a successive development of the phénakisticope, first invented in 1933, which created the illusion of movement by combining a rotating disk with engraved figures and slits with a mirror against which one had to view the subject. The strips included here include a couple dancing, a jockey and his horse, a fish in the water, a monkey riding a dog, a girl jumping rope, an obese man on his back kicking a large ball, a man under an umbrella besieged by falling silverware, a boy doing somersaults, the devil balancing on a large ball, and, a popular trope of the day, a man removing his large head. As of August 2019, KVK and OCLC do not record any early zoetropes (only late-twentieth-century reproductions). (Inventory #: 50138)
$1,500.00 add to cart or Buy Direct from
Bernett Penka Rare Books
Share this item