carrots, as we all know, do not cast shadows [Signed and Inscribed] 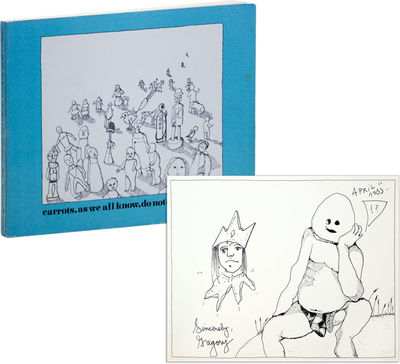 Noted Minnesota artist Gregory W. Bitz provides a humorous, fanciful collection of poems and illustrations that are perhaps best described by Chas Fowler: "He leads us down the garden path, and beckons us slyly under shadowy ferns among mystical beetle tracks. No one is at home, and the woods are full of little people tinkering with tiny hammers. Branches creak. Choirs of weasels are singing. A deaf rabbit strolls by. And while you stand there perplexed, Bitz is hiding in the bushes around the side of the house, dressed in an owl suit, chuckling all to himself. (Inventory #: 46727)
$30.00 add to cart or Buy Direct from
Lorne Bair Rare Books
Share this item

Faith and the Good Thing [Inscribed]

New York : Viking Press , 1974
(click for more details about Faith and the Good Thing [Inscribed])
View all from this seller>