With the V.A.D. Convoys in France, Flanders, Italy 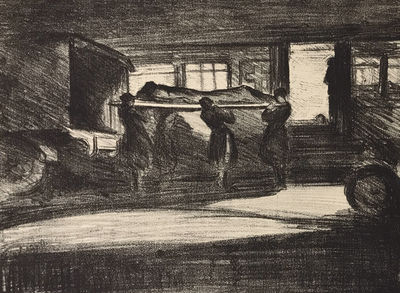 by Mudie-Cooke, Olive
[Cambridge], 1921. First and only edition of this collection of World War I lithographs by ambulance driver and war artist Olive Mudie-Cooke (1890-1925), signed and dated on the printed plate list. In 1916, London art student Mudie-Cooke enlisted as an ambulance driver on the Western Front, driving for both the First Aid Nursing Yeomanry (FANY) and the Voluntary Aid Detachment (VAD). For the next two years, she transported wounded soldiers along the front lines in France, Flanders, and Italy, occasionally working as a translator for the British Red Cross. Throughout her service, Mudie-Cooke sketched and painted what she saw around her: field hospitals, stalled tanks, "Hun pillboxes," blasted trees, ruined churches, a line of ambulances parked in a dark forest, "standing by for orders." Her work is characterized by a documentary eye, with close attention paid to the logistics of the relief effort and the precise damage inflicted on buildings, vehicles, and bodies at the places she names: the Somme, Ypres, Paschendael. Landscapes are eerily depopulated, compositions spare and controlled. After two years at the front, Mudie-Cooke returned to London, where her work came to the attention of the newly founded Imperial War Museum. The museum acquired a number of her paintings, and commissioned more, including the uncharacteristically sentimental "In an Ambulance: A VAD Lighting a Cigarette for a Patient" (1919). After the Armistice, the British Red Cross asked Mudie-Cooke to return to Europe to document the VAD units still in operation there, and in 1921, the Cambridge University Architectural Society held an exhibition of her wartime work. It was then that these lithographs were produced. "The artist explained to the Imperial War Museum - when she requested permission to reproduce two of the watercolours they had commissioned - that she was creating the portfolio With the VAD Convoys in France, Flanders, Italy 'chiefly as a souvenir album for the VAD ambulance drivers with whom I worked during the war'" (50/50: Fifty Works by Fifty British Women Artists). With the exception of three comic "Caricatures, Etc.," depicting the VAD driver in theory, in fiction, and in real life, the portfolio is much more than a keepsake among friends. These stark lithographs would be the only published work by Mudie-Cooke, who took her own life in 1925. The signed plate list includes thirteen images, all present here ("Caricatures, Etc.," a group of three small images mounted together, counted as a single work), with fourteen additional lithographs included as well. The lithographs on the list are: "Beaulencourt Church;" "Tank on the Ypres-Poelcapelle Road;" "Étaples Siding," "V.A.D. Convoy," "Convoy at Camiers;" "Ypres Cloth-Hall;" "Peronne;" "The Somme;" "Étaples Military Cemetery;" "Paschendael: Hun 'Pill Boxes;'" "Calais, Boulogne Harbour;" "B.R.C.S. Headquarters;" and "Caricatures, Etc." They are joined by fourteen others: "Bethune;" "Arquata: Clearing Snow Off Cars at Hospital;" "Wimereux: Volunteers Laying a Plank Road;" "Old Bordiguera Looking Toward San Remo;" "Hospital Evacuation at Night;" "Remy Convoy;" "Genoa: The Hairpin Road to the Italian Barracks;" "Night: Convoy, Camiers;" "Beaulincourt: Board Road to Bapaume, Outside 43 C.C.S.;" "Étaples Raids: Nurses and VADs Camping Out in the Woods / Drivers Standing By for Orders;" "Rouen: The Drivers Hut;" "Italian Convoy - The Crush at 11B Hospital, Genoa;" "Treport;" and "St. Martin, Ypres." It seems likely that Mudie-Cooke assembled and signed portfolios as needed, pulling prints that were ready or requested at that time. We locate four institutional holdings of With the V.A.D. Convoys in France, Flanders, Italy, each with a different plate count: two at the Imperial War Museum (one with 26 lithographs, one with 40), Southern Illinois (29), and Brown (35). Over the past decade, Mudie-Cooke's work has received renewed critical attention, usually in the context of art by women, but also in the Turner Contemporary's 2018 "Journeys with The Waste Land" exhibition. All of her recorded original art is held by the Imperial War Museum, so the handful of surviving VAD portfolios (and the individual lithographs pulled from them) are likely the only other lifetime examples of her work extant. A powerful eyewitness document of the Great War. Collection of twenty-seven lithographs of varying sizes, ranging from 3 x 4.5 inches to 9.5 x 15 inches, printed on grey or white paper, some with additional hand-coloring, some with original mounts. Original list of thirteen plates, printed in red, signed and dated "1921" by Olive Mudie-Cooke in pencil, crudely mounted to remnant of original portfolio (not present). Original tan paper wrapper with pastedown title label. Some soiling and edgewear to surviving mounts; loss to top right corner of "Italian Convoy: The Crush at 11B Hospital, Genoa" (not touching image). Lithographs, mounted plate list, and wrapper housed in a custom box. (Inventory #: 1002506)
$12,500.00 add to cart or Buy Direct from Honey & Wax
Share this item
Honey & Wax Booksellers
Offered by

A Book for Christmas Reading

Chicago : The Cuneo Press , 1947
(click for more details about A Book for Christmas Reading)

Chicago : The Cuneo Press , 1956
(click for more details about A Collection of Stories of Land and Sea from the Late 19th Century)
View all from this seller>