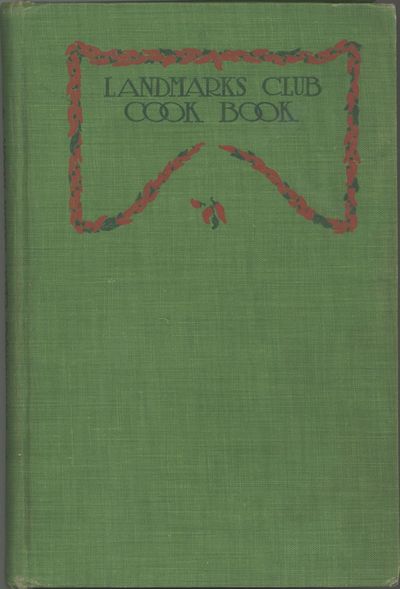 by [Landmarks Club (Los Angeles, Calif.)]. [Charles Fletcher Lummis]
Los Angeles, Cal: The Out West Company, 1903. Octavo (24 x 15.5 cm.), [xiv leaves of plates], [iv],[ii plates], vi, 261, [xix] pages. Illustrated with reproductions of photographs documenting site restorations. Decorated endpapers. Table of contents. Index. Pages at rear "Blanks for your pet recipes". ~ Evident FIRST EDITION. A community cookbook undertaken to raise funds for the restoration of architectural landmarks of Southern California, and especially of the Franciscan missions, the dilapidated conditions of which can be seen in some of the accompanying photographic illustrations. Includes a foreword by Charles Fletcher Lummis (1859-1928), who had become the first City Editor of the Los Angeles Times after chronicling by dispatch his tramp across the continent during the fall and winter of 1884-85. With eight hundred attributed recipes, generous among them some enduring standards but also many entries of eye-catching interest, to wit: Chupé (a shrimp soup), Calabacitos con Queso, Colaché (with green pumpkin), Galloria, Migas, Papas con Aji, Capirotada, Atole de Piña (corn meal with grated pineapple), Ranfañote; and in the general chapters, Cream of Lima Bean Soup, Dried Apricot Soup, Abalone Fritters, Jugged Hare, Roasted Partridge, Chestnut Salad, Celery Root Salad, Artichokes al Inferno, Native Mushrooms in Brown Butter, Tortas de Huevos, Cherry Omelet, Nasturtium Sauce, Rothe Groetse [i.e., Grütze] (with red currants and palm sago), Banana Float, Burnt Almond Charlotte, Walnut Pudding, Sultana Cake, Anchovy Catsup, Greengage Jam, Guava Paste, Grapefruit Punch, Candied Rose Leaves. ~ As a newspaperman, founding publisher of Land of Sunshine (a successful magazine, renamed Out West in 1901), and - after 1905 - administrator of the Los Angeles Public Library, Lummis was well connected to promote The Landmarks Club, of which he appears to have been the driving force. By 1903 the Club had secured permissions and initiated repairs of San Juan Capistrano (in Orange County), San Fernando Rey (in Mission Hills), San Diego de Alcalà as well as San Luis Rey, the largest mission of the Franciscan Friars (both in San Diego County). Its achievements were considerable, given that only a token fee was asked for club membership, and the average size of donations was small. In this connection, it would appear likely the network that produced the cookbook - all of the contributors save Lummis were women - played a significant role. ~ At least with respect to the entries from Mexican and Peruvian tradition, the publication reins were grasped by Lummis, a larger-than-life Angeleno - Text Box:and president of The Landmarks Club - who had veritably shed his Yankee upbringing and embraced the Southwest with all the fervor of a convert. He lived for a time in - and may be considered an early ethnographer of - the Isleta Pueblo of central New Mexico. There he befriended the Swiss-American archaeologist Adolph Bandelier (1840-1914), whom he joined on an exploratory survey of Peru. His interests were wide-ranging, and his short essay here on "Spanish-American Dishes" served as a prescient English-language description of what would come to be recognized as an authentic (as opposed to an attenuated) Mexican cookery. More important, Lummis foresaw the threat posed by assimilation to the accumulated lore of the Native American and Colonial Spanish table - a recognition that likely accounts for the unusual level of detail provided in the forty or so Mexican and Peruvian recipes that constitute Chapter 1. ~ Front hinge started; text block nonetheless tight, and interior clean. Dime-sized abrasion, and bit of tape residue to free front endpaper. In publisher's decorated green cloth, with a garland of ripe red chili peppers (Capsicum annuum) on the front panel, and a few separate peppers on the rear. Very slight rubbing to extremities, otherwise bright. Overall near fine. Handwritten recipe for Pie Crust and a shopping list, in pencil to the blanks at end. Scarce. [OCLC locates thirty copies; Bitting, page 295; Brown 59; Cook, page 28; Glozer 150; Longone I:6; Strehl 12; Zamorano Select 60; not in Cagle]. (Inventory #: 6704)
$1500.00 add to cart or Buy Direct from
Rabelais: Fine Books
Share this item

Specializing in Six centuries of printed and manuscript books on food and drink, including cookery, gastronomy, wine, spirits, mycology, farming and gardening. An extensive inventory of culinary ephemera includes menus, trade cards, photographs and more. We buy and sell fine and rare books on all fields related to food and drink, and work with clients worldwide to source rare books and develop private collections. We also appraise books and archives in these and related fields.

Unless alternate arrangements have been made, payment is expected at the time of purchase. We accept payment by credit card, wire transfer, PayPal, check, or money order. All orders are shipped promptly and securely packed in boxes to avoid damage during shipment.Shipping costs stated are estimates. Large sets or particularly heavy items may require additional postage, especially for priority or international service.All items are guaranteed to be as described (this includes condition, edition, authenticity of signatures, etc.). If you are not satisfied with your order, please contact us and we will be happy to work with you.Returns are accepted for any reason. Notification of return within 10 days of receipt is appreciated. Please send returns by the most economical method, and you will be refunded upon receipt.
More from this seller

Prodigies and Prodigals brought to you by Guinness

The Dinner Knell: Elegy in an English Dining-Room