Apple Pie, An A B C Book 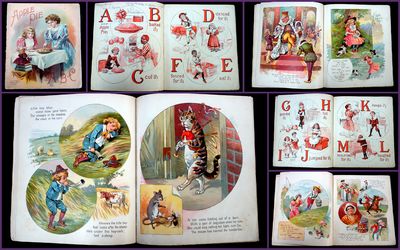 New York: McLoughlin Brothers, 1891. An ABC and nursery combination book that alters between the alphabet and various nursery rhymes. The ABC section has two-color illustrations (black and red) that depict each letter, with three to four letters on each page. It also follows a single story thread, that of an apple pie and what one can do with it. For example, B is for Baked it, D is for Danced for it, P is for Peeps at it, T is for Tastes its. While all letters of the alphabet are represented in the book, the letters I and Z do not have separate phrases. After two pages of letters, the book switched to two pages of nursery rhymes, and vise-versa. The nursery rhyme pages feature full color illustrations depicting scenes from the following nursery rhymes: Jack and Jill, I Had a Little Husband, King Cole, Little Miss Muffat, Little Boy Blue, and A Cat Came Fiddling. The front cover features a color illustration of a mother cutting an apple pie with her daughter and doll seated at the table. 16 pages, including covers Measures 10 1/2" x 9 1/4". (Inventory #: 29017130)
$50.00 add to cart or Buy Direct from Eclectibles
Share this item