A Photographic Atlas of Selected Regions of the Milky Way (in 2 vols.) 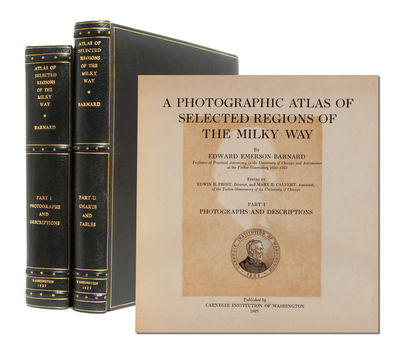 by Barnard, Edward Emerson
Chicago: Carnegie Institution of Washington, 1927. First edition. Near Fine. Modern full black morocco with gilt to spines. Marbled endpapers. Just about Fine, with some offsetting to the preliminaries from the frontis piece of volume I. One of a limited run of only 700 copies, illustrated with 51 fine black and white, linen-backed silver photographic prints. A landmark work in astronomy.

"In 1877, Barnard bought a five inch astronomical telescope which cost him $380, two thirds his annual salary, and with it he began serious observations on his own, recording all he saw...By 1895 he accepted a position at Yerkes Observatory...and in 1897 he succeeded in persuading Catharine Wolfe Bruce, a wealthy recluse, to provide funds to build a wide-field photographic telescope for him to use to continue his work on the Milky Way (ANB). For his observations as well as for his discovery of Jupiter's fifth satellite, he is remembered as the world's foremost observational astronomer, ranking alongside Sir William Herschel for his contributions and his genius. "Hardly any branch of astronomy was not enriched by his attention" (DSB). The first volume contains 51 black and white, linen-backed silver photographic prints; this was a decision Barnard personally made before his death, determined that no other method would be adequate for capturing the Milky Way's details. The second volume contains a table and chart interpreting each photograph. Barnard personally inspected the volumes, "sparing no pains to assure himself that the prints were uniform in quality and faithfully represented the originals." A triumph in astronomical study. Near Fine. (Inventory #: 3186)
$8,500.00 add to cart or Buy Direct from
Whitmore Rare Books
Share this item