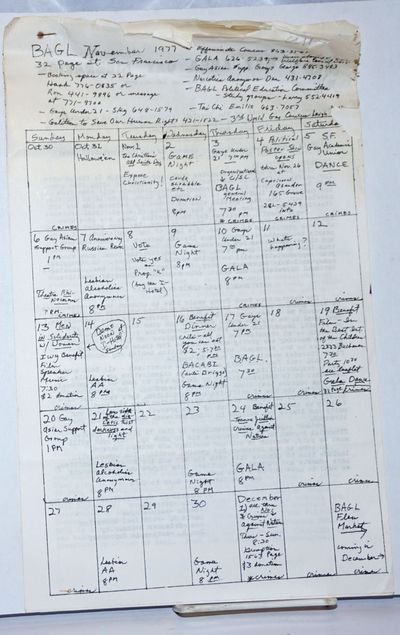 by Bay Area Gay Liberation [Howard Wallace and Gay Action Caucus]
San Francisco: BAGL, 1977. Four 8.5x14 inch mimeographed sheets printed both sides, BAGL and resource numbers and addresses at top, calendar of events first page, heavily-worn at top with tears and chipping, three horizontal fold creases for mailing, address label of Eric Garber aka Andrew Holleran, stapled upper-left with rusty staple. BAGL was founded in 1975 by former members of the Socialist Workers Party, primarily Howard Wallace, who, in 2004, described the organization as follows: "In 1975, two other people and I initiated an organization called Bay-Area Gay Liberation (BAGL). Its aims were to advance lesbian and gay liberation by reaching out to potential allies within the labor movement, the feminist movement and movements of people of color and national minorities." BAGL split in the late 70s into an ultra-left faction and a group which left to form the SF Gay Democratic Club (now the Harvey Milk LGBT Democratic Club). No copies located in OCLC as of 9/2015. (Inventory #: 244266)
$75.00 add to cart or Buy Direct from Bolerium Books
Share this item